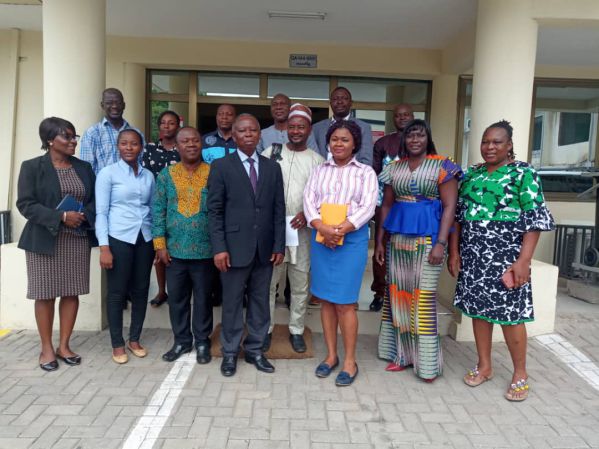 A4WA withe the ministry of water and sanitation

The Alliance for WASH Advocacy (A4WA), a coalition of civil society organisations (CSOs) and networks in the Water, Sanitation and Hygiene sector has paid a courtesy call on the Ministry of Sanitation and Water Resources concerning the review of key national WASH policies to the Government in Accra.

The two position papers presented by A4WA to the ministry for review were, A4WA Position on the Role of Private Sector in WASH Delivery and Position on key National Water,Sanitation and Hygiene (WASH) Policies.

The A4WA is led by Intervention Forum and supported by the SNV under its Voice for Change Partnership Programme.

In interview with Daily Graphic, convener for Alliance for WASH advocacy Mrs.Nora Ollennu indicated that the Millennium Development Goals (MDGs) informed the NWP 2007 and the Environmental Sanitation Policy (ESP 2010) documents of the current ongoing reviewing of policies so they had to make sure theirs was reviewed to reflect the language, standards and aspiration of the SDG 6.

According to her a recent research findings by the Alliance on the various policies and strategy documents in the WASH sector had provided an update on Ghana’s WASH policy landscape which is the only way of ensuring the attainment of SDG 6.

“For instance, the SDG 6 and especially SDGS 6.1 and 6.2 has different layers of service standards for water and sanitation. It starts from no service to safely managed services. The MDGs layers ended with basic services”,he stated.

She said an assessment of the NWP by A4WA revealed that there were some issues of concern such as the NWP 2007, which was only aligned to MDG WASH target which had since been replaced by the current SDG 6.

Adding that the ESP presents environmental sanitation as one of the powerful drivers of human development.

She noted that their research had revealed that the development policy framework of the ESP was informed by the MDGs and so should be reviewed to align with the SDGs.

She said that the National Environmental Sanitation Strategy and Action Plan (NESSAP) was about raising awareness for changing the behaviours of people; adding that it guides the metropolitan, municipal and district assemblies (MMDAs) to commence and achieve incremental improvements between 2008 and 2025 for all aspects of environmental sanitation.

Adding up, the research, Advocacy and Policy Lead, A4W, Dr Tanko Yussif Azzika stated that even though the ministry has accepted the position papers it is up to them as an organisation to put pressure on the ministry to make things faster so as to move with the current era.

He added that most of the national policies on WASH, which were created during the era of the MDGs were outdated and therefore, did not response adequately to demands of present reality.

He said the position of the Alliance was for a review of all national policies in the WASH sector.

The acting chief director of the ministry of water and sanitation, Mr. Obeng Poku, who expressed gratitude to the Alliance for their support and partnership with the Ministry, also urged them to continue with the collaboration.

He assured the Alliance that the Ministry would study their position paper on review of key national WASH policies and all the good inputs in the document would be taken into consideration in the preparation of any future policy document.