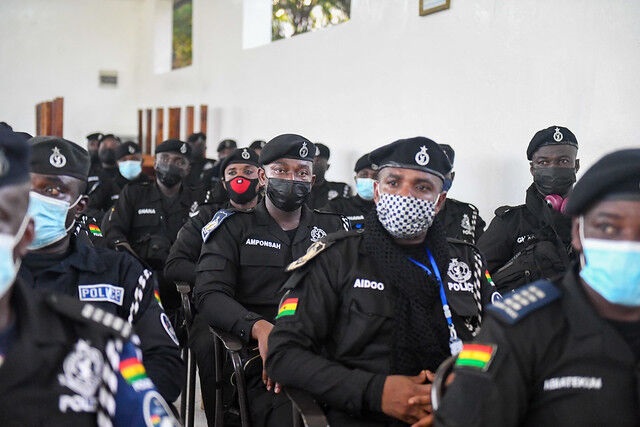 The Ghana Police Service (GPS) has deployed a new contingent of Police officers to serve under the African Union Mission in Somalia (AMISOM).

AMISOM in a statement said a team of 113 newly deployed personnel, from the Formed Police Unit (FPU), arrived in Mogadishu, Somalia, on Monday, to begin their one-year tour of duty and help build the capacity of their counterparts in the Somali Police Force (SPF).

The new personnel join an advance party of 47 other officers, who had earlier jetted into the country, to constitute a contingent of 160 personnel that will be based in Baidoa, the administrative capital of South-West State of Somalia. They will complete a two-week COVID-19 quarantine period before heading into Baidoa.

On arrival in Mogadishu, the officers were welcomed by the AMISOM Police Commissioner, Assistant Inspector General of Police (AIGP) Augustine Magnus Kailie, and senior members of the AMISOM Police Leadership Team.

In his remarks, the Police Commissioner noted that the officers had arrived at a critical time when Somalia is holding elections and urged them to play a key role in securing the ongoing elections, and serve the mission diligently.

“We have an assignment at hand to provide security for the ongoing elections. These elections are not a day’s business, but will span perhaps up to January. So, my word of caution to you is that you have to be very careful and dedicated to your duty,” said AIGP Kailie.

This is the second FPU contingent to be deployed by Ghana, to serve under AMISOM. They replaced the first contingent, whose tour of duty has ended.

AIGP Kailie urged the newly deployed officers to respect the culture of the local community and of other people serving in the mission. He also appealed to them to be disciplined and professional in discharging their duties.

“This is a multi-dimensional mission with people from diverse background. There are things that are acceptable back home, which are not acceptable here. You have to be careful and mindful of what you are doing and in your interactions with other nationals,” he said.

AMISOM Police Operations Coordinator, Deputy Commissioner of Police (DCP), Daniel Ali Gwambal, briefed the officers on some of their duties, which includes provision of operational support to the Somali Police Force (SPF).

“Some of the duties you are going to perform are incumbent on you as a Formed Police Unit- that the Individual Police Officers cannot actively carry out. They include patrols, vehicle checks, stop and search, search and rescue, and other humanitarian services where your assistance will be needed, ” said DCP Gwambal.

He also informed the police officers that they could also be involved in some static police duties, like guard duties at key and vulnerable points in their areas of jurisdiction.

The AMISOM Police component is made up of the Formed Police Units (FPUs) and Individual Police Officers (IPOs). FPUs provide operational support, while the IPOs train, mentor and advise the SPF officers.

AMISOM Police plays a critical role in ensuring that the Somali Police Force is adequately capacitated and is capable of taking full charge of policing activities in the country.

The Deputy Contingent Commander of the newly deployed unit, Deputy Superintendent of Police (DSP) Felicia Amo Boadu, said her team were eager and ready to advance the mandate of the mission and work collaboratively with the SPF.

“We are happy to be in Somalia to help in the peacebuilding process that’s going on. We will work in coordination with the Somali Police Force officers in line with the AMISOM mandate,” said DSP Boadu.

Ghana is one of the Police Contributing Countries (PCCs) to AMISOM. Others include Kenya, Nigeria, Sierra Leone, Uganda and Zambia.