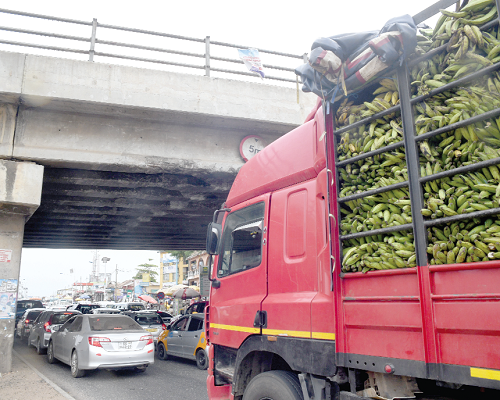 An overloaded truck passing under the Abofu Bridge at Achimota in Accra. Picture: emmanuel quaye

The Ghana Highway Authority (GHA) will, from next week, begin the strict enforcement of Axle Load regulations to help stamp out recalcitrant transit truck drivers whose activities are destroying the country’s road infrastructure.

This follows the destruction of many overhead bridges as a result of truck load beyond the five-metre requirement.

The enforcement is in line with the Road Traffic Regulation, 2012 (LI 2180) and will be carried out in collaboration with the Ghana Police Service.

The acting Chief Executive Officer of the GHA, Mr Christian Nti, told the Daily Graphic that the authority had engaged the leadership of the police to firm up the right strategies to employ to curb the overweight and over-height loading of trucks, which reduced the lifespan of roads.

“Those who destroy bridges will be surcharged — the police will arrest them and they will pay for the destruction. We need to, as a nation, curb the negative impact of overweight and over-height loads carried in heavy-duty vehicles. One day, the bridges can collapse and it will become a national disaster,” he said.

Mr Nti said the GHA was embarking on the enforcement drive due to the perverse manner in which drivers of heavy-duty vehicles overloaded their trucks in sharp contrast to what the law prescribed.

“It is almost as if it is normal to go beyond the 4.5-metre limit, and that is why they keep breaking the bridges, which are expensive to build,” he said.

He added that due to such activities, Ghana’s road infrastructure was increasingly under threat, forcing the government to pump into the road sector money that could be used to address other pressing national needs.

“A road that should have a life span of 25 years may only last half of the period because of some of these activities, and the government is always forced to look for more money to rehabilitate the destroyed road infrastructure,” he said.

Mr Nti explained that adherence to the axle load limit would forestall the premature failure of Ghana’s highways and, consequently, save it the huge sums of money that were applied annually to the rehabilitation of roads.

He cautioned the public to desist from encroaching on the buffer of roads which was meant for future expansion works, as the objective of the government was to expand all highways into dual carriages.

He said the public must be aware that they had no business engaging in any permanent or makeshift activity at least 30 metres from the centre of a road at both ends.

“People shouldn’t assume that the rest of the land by roads is free and, therefore, they can move onto it. When the time comes to expand to dual carriages in the future, the authority will be faced with problems with compensation, which doesn’t make the authority finish projects on time,” he said.

He said they must comply with the rules that governed axle stations and ensure that they followed the requirements to avoid prosecution.