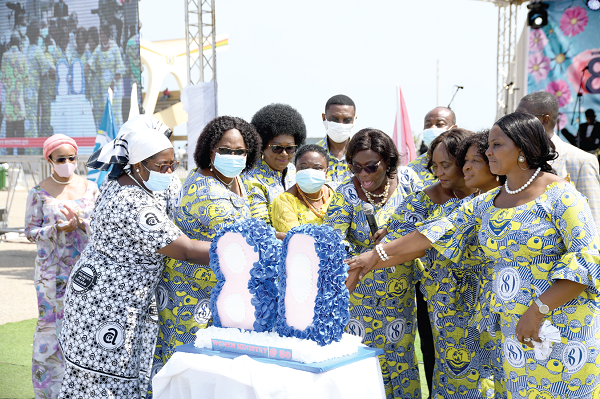 The Women’s Ministries of the Assemblies of God (A-G), Ghana, last Saturday celebrated its 80th anniversary, with a call on Christian women to strive to teach children and the youth the word of God to enable them to learn to live righteous lives that are pleasing to God.

The former Chief Justice, Mrs Georgina Theodora Wood, who made the call, said Christian women owned the duty to imbibe in the young ones the need to obey God and refrain from ungodly and unethical lifestyles that was making the order of the day in society today.

Speaking as the guest of honour at the event, Mrs Wood said “Our nation is faced with frightening levels of ungodly and unethical living and practices in our body politic and we appear to be sliding dangerously into a state of virtual helplessness.

“Who can save us from this decay? Laws and their strict enforcement aside, we know it is only an unparalleled devotion to the Lord God and obedience to his unchanging word that can transform our lives and cause us to keep away from all acts of lawlessness.”

The event, which was held on the theme “Revive us again” brought together members of the ministries from the southern sector - Greater Accra, Eastern, Central and the Volta regions - to praise and worship God for progress chalked so far.

The ministries, which was formed in the early 1940s, today, comprise of three auxiliary younger female groupings - The Missionettes, Young Women in Action (Y’s) and Joy Fellowship - undertaking evangelism, social responsivities and prayers for the church and the nation.

The event attracted a large number of people from all walks of life including former President John Dramani; the Member of Parliament for Klottey Korle, Dr Zanetor Agyeman-Rawlings; the National Prayer Secretary of Aglow International, Mrs Gifty Affenyi Dadzie; the clergy and other women’s ministries from other denominations.

The former Chief Justice said one of the strongest pillars of the A-G, Ghana, was the emphasis on consistent teaching and learning of the unadulterated word of God for the purpose of getting church members to know God’s revealed will and obediently apply it to their daily lives.

She, therefore, called for greater unparalleled devotion to God and obedience to his unchanging word to help transform “our lives and cause us to keep away from all acts of lawlessness.”

“On this score, I am convinced that, provided we are ready to cooperate with the Lord, he can use the Women’s Ministries, effectively working through the Missionettes and the Y’s in particular, early on in life, to learn to live righteous lives that please the Lord.

“It is our duty to let our up-and-coming young boys and girls, who are our hope and future leaders, fully understand that others may choose to live in utter disobedience to God's word, but they cannot, for the simple reason that they bear the marks of Christ Jesus,” she said.

Women are engine of growth

Speaking as the special guest, former President Mahama encouraged women to strive to take their rightful place in society to enable them to be change-makers and to help correct the wrongs and evil plaguing in the Ghanaian society today.

With women forming majority of the 31 million population of Ghana, per the 2021 population and housing census, he said both private and public sectors had women contributing their quota to national development.

More significantly, he said the private sector had informal economy where almost 90 per cent of the labour were made up of women who were making a difference.

Delivering the sermon, the General-Secretary of the A-G, Ghana, Rev. Dr Bismark Kwame Bansah, said God loved memorials and the celebration of anniversaries but he expected that such celebrations must go along strategic planning to achieve visions.