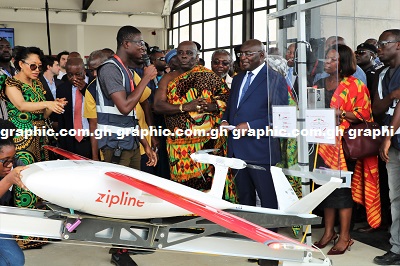 Vice-President Mahamudu Bawumia and Osagyefuo Amoatia Ofori Panin (in Kente cloth), Okyenhene, being briefed on the operations of the Fly to Save a Life Project at Omenako in the Abuakwa North Municipality of the Eastern Region. Those with them include Mr Kwaku Agyeman Manu, Minister of Health; Ms Caroline Jehu-Appiah (left) of the Bill and Melinda Gates Foundation and some invited guests. Picture: David Paa-Kwasi Able
30.5k Shares

The Vice-President, Dr Mahamudu Bawumia, yesterday inaugurated the first centre from where blood and other essential medicines and vaccines will be distributed by unmanned aerial vehicles (drones) to hospitals and other healthcare facilities.

The opening of the first Zipline distribution centre at Omenako in the Abuakwa North municipality in the Eastern Region ends months of debate about the appropriateness of the service, especially given its initial cost for the first four years at an estimated cost of $12 million.

Known as the ‘Fly to Save a Life Project’, the initiative will fly special purpose drones from the Omenako centre to distribute essential medical supplies to health facilities in the Eastern Region, parts of the Ashanti and Volta regions as well as the entire Afram Plains.

Three more centres will be constructed at strategic locations in the country.

According to Zipline, the ‘Fly to Save a Life Project’ was the largest medical drone delivery service in the world.

When all four distribution centres become operational, Zipline will be scaling up its capacity to 600 on-demand delivery flights a day on behalf of the government.

Each Zipline distribution centre has the capacity to make up to 500 flights per day.

Launching the project, Vice-President Bawumia recalled how he met the Zipline management in the Silicon Valley in the United States of America (USA) two years ago and said with the support of the President, the company had been able to establish its presence in Ghana to use technology to save lives.

The government, he said, was also using technology to increase access to basic public services that every citizen deserved, adding that the drone service would solve a major challenge in health delivery to those in remote areas who could not be reached easily by road.

Dr Bawuma also stated that the system would solve the no bed syndrome in hospitals. 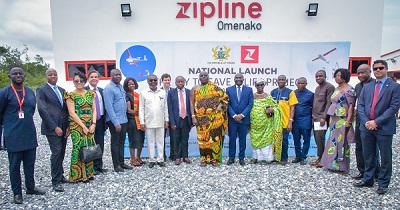 The Vice-President said it was refreshing that people living in hard-to-reach areas such as the Dwarf Islands in the Afram Plains and mothers in labour who needed blood could be reached within the shortest possible time.

He mentioned how the Omenako centre was able to deliver blood to the New Tafo Government Hospital 18 minutes after the call was placed to save the life of a driver who was critically ill.

He disclosed that the operational team at the Omenako centre was purely Ghanaian, made up of 10 females and nine males.

Dr Bawumia said the government would continue to deliver on its promise of providing holistic health care for the people.

He mentioned, for instance, that the use of mobile money for the renewal of the national health insurance subscription had resulted in about 70,000 renewals each year.

He also said the government would by June this year deliver an ambulance each to all the constituencies.

The Vice-President said under the Health Information Management System, which was yet to be rolled out, all medical records would be digitised for efficient management of health delivery and that by the next two years, all the hospitals would be going paperless.

The Okyenhene, Osagyefuo Amoatia Ofori Panin, welcomed the Zipline Drone Technology which he said would help save lives.

He said the government was doing its utmost best to bring about the needed technology and development but cautioned those who would be manning the drones at the distribution centres and the drugs to be patriotic and work efficiently without resorting to pilfering the drugs.

The Okyenhene said measures should be put in place to ensure that those who would make up their minds to destroy or sabotage the project would be stopped so that the ordinary people would have better access to quality health care.

He urged the government to speed up the decentralisation process by spreading development so that medical staff, public servants and other people would not find it difficult working in rural places.

The Minister of Health, Mr Kwaku Agyeman Manu, said the drones would not replace the traditional bulk distribution of medicine to all parts of the country and would also not culminate in job losses, but would rather generate more employment.

The Zipline Drone Technology service will operate 24 hours a day and seven days a week, from the four distribution centres.

Each centre will be equipped with 30 drones and deliver to 2,000 health facilities, serving 12 million people across the country.

The drones can carry 1.8 kilogrammes of cargo, cruising at 110 kilometres an hour, and have an all-weather round-trip range of 160 kilometres.