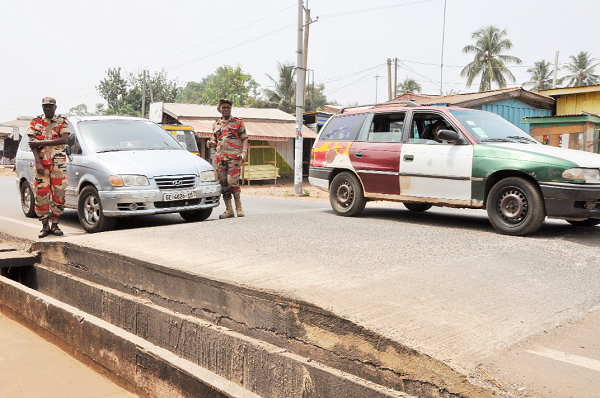 The Ghana National Fire Service (GNFS) has expressed concern over new unauthorised speed humps and bumps on roads in the Volta Region, saying they are frustrating its rescue and other emergency operations.

“The humps are made of crude materials such as tree stems covered with clay, and they are extremely dangerous to vehicular movement,” the Deputy Volta Regional Commander of the GNFS, Assistant Chief Fire Officer (ACFO) Prince Billy Anaglate, said.

Besides, there were no signs warning motorists about the humps and bumps ahead, he added.

ACFO Anaglate told the Daily Graphic in Ho that there were more than 100 of such humps in various communities in the region, especially in the southern part.

He said the humps were of no specification and had no regular distance between them, “and so as soon as you reduce speed and are about to change gear, you meet another hump”.

ACFO Anaglate explained that the slightest delay in rescue or an emergency operation could cost lives and properties on an extensive scale.

“Our fire engines are bulky, some of 3,000-gallon water capacity, and such obstructions on the roads can cause terrible accidents,” he pointed out.

He said it was mind-boggling how the humps were springing up, with no response from local assemblies and the Ghana Highway Authority (GHA), stressing that it was high time they took prompt and decisive steps to remove the “nasty humps from the roads”.

He said apart from the danger to fire engines, the humps and bumps posed a similar threat to ambulances and other relief workers.

Meanwhile, the Daily Graphic has found that some traders near Ave-Dakpa in the Akatsi North District have, for instance, erected humps on some portions of the Ho-Aflao road to compel motorists to slow down by their vegetable stalls.

Some of the humps are made of cement blocks and wood.

A distraught Chief of Ave-Atanve, Togbe Hodzi Dunyo IV, said in an interview on phone that the humps were being erected on a daily basis.

In some instances, the people rather dug trenches across the road, he said.

“But the roads belong to the GHA, and so we are rather surprised to see some recalcitrant people destroying them with impunity,” he said.
Togbe Dunyo said the humps and the trenches were a recipe for accidents and mass fatalities on the roads.