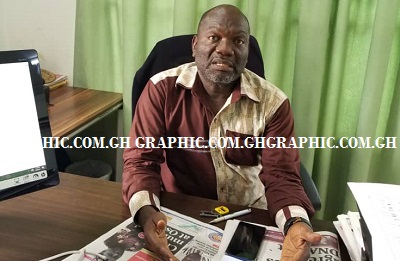 The Driver and Vehicle Licensing Authority (DVLA) has raised over GH¢226,000 from spot fines from motorists who use fake Defective Vehicle (DV) number plates in random operations undertaken in the city of Accra in the first half of this year.

The move is part of an exercise by the special task force of the DVLA to clamp down on the use of fake DV plates that have become prevalent.

The average monthly arrest of fake DV plates, according to the DVLA, is 104 from the random operations within the Accra metropolis.

It is also estimated that several millions of Ghana cedis are lost to the state due to the increasing use of pirated number plates by the several thousands of unregistered vehicles in the system across the country.

The National Coordinator of the Compliance and Enforcement Unit of the DVLA, Mr Joseph Clifford Obosu, confirming the figures to the Daily Graphic, bemoaned the increasing use of fake trade plates for unregistered vehicles.

It is unclear where the fake DV plates, almost similar to the one issued by the DVLA are procured from, but the rise in the use of fake plates is due to the fact that it is cheap and relatively easier to access.

The original DV number plate from the DVLA costs GH¢250 and one has to go through laborious paperwork to acquire it, and it expires in a year.

A motorist with a fake DV number plates is required to pay a spot fee of GH¢310 to regularise the trade number.

The Daily Graphic joined the DVLA task force in one of its operations on the Awudome road to Obetsebi Lamptey Circle in Accra to observe at first hand, how the team embarked on their duty.

One key observation made by the paper was that, many of the drivers with the fake DV number plates were stopped on that day and their first reaction was to plead for mercy.

Some of the culprits who spoke to the Daily Graphic said their fake DV plates were procured from the DVLA offices in Kumasi.

Others also pleaded that because the vehicles arrived in the second half of the year, they wanted to use the DV plates until the vehicles were registered in 2020.

“We have also realised that a lot of the fake number plates are coming from Kumasi and we have to find a way to deal with the problem,” Mr Obosu confirmed.

It is estimated that a quarter of the 1.5 million vehicles with DV number plates in the system are fake and not properly procured from the DVLA.

The steady rise in the use of the pirated and fake DV number plates have become a growing concern to the authorities as it is estimated that a quarter of the DV plates used by unregistered vehicles are fake.

The figure would have doubled if the operations were mounted daily in Accra alone, which would have raked in millions of Ghana cedis due to the increasing use of fake DV plates in the system.

“Can you imagine if this operation is replicated in other parts of the country, the revenues the state would have derived”?, Mr Obosu asked.

Mr Obosu said it was a source of concern that many people had resorted to the use of fake trade licences as normal registered plates.

The Head of the DVLA task force unit also expressed worry that some motorists with DV number used the vehicles for social activities.

He said the use of DV and DP number plates was regulated by Section 50 (b) of the Road Traffic Act 2004, Act 683, which, among others, prohibited users from carrying passengers or goods for hiring or reward.

He said the act further prohibited the use of trade plates for social activities such as funerals, weddings and carrying of children to and from school, family, relatives and friends.

The regulation also prohibits trade number plates to be used in carrying passengers or goods or for hiring for a reward, and the vehicle should not be driven by more than one person. But the case in the region is that people carry passengers in their DV and DP plated vehicles with impunity.

Vehicles issued with the DP trade plates have up to 15 days to change to DV plate for the vehicle to be taken to the licensing office for due registration or kept in the garage until the owners are ready to register it.

The DV number plate is used when a motor vehicle is being tried by or on behalf of a prospective purchaser.