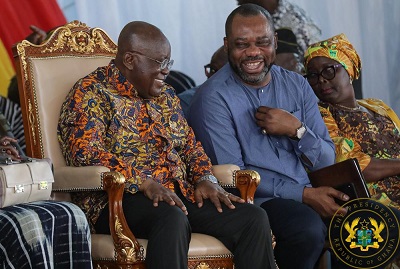 President Nana Addo Dankwa Akufo-Addo has stated that the best answer he will give critics of the Free Senior High School (SHS) policy is the results of the first batch of students of the policy.

He confidently said the results of the pioneer students in the West African Senior School Certificate Examination (WASSCE) would be positive, and that is when critics of the policy would know that the huge investment in the policy was worth it.

Addressing students of the Bolgatanga Senior High School (BIGBOSS) at Winkogo in the Talensi District yesterday as part of his two-day tour of the Upper East Region, the President emphasised that the “Free Senior High School policy has come to stay.”

“I am prepared to use the oil money to secure the future of our children through education and not to allow it to go into individual pockets and be misappropriated,” he stated.

He said education played a major role in the country's development and was also key to the country's future, hence it was “better that we spend the oil money on the country’s future".

President Akufo-Addo further observed that some political opponents were still “dreaming that when they come to power they will scrap the Free SHS policy, but I want to emphasise that the policy has come to stay because they are living in a different world and Ghanaians at the end of the day will tell them that they were wrong in their perception".

He said politicians must always endeavour to tell the truth to Ghanaians and not peddle falsehood.

The President observed that the government for the past two and a half years had been laying the foundation “in our physical and social infrastructure” and that the economy had been projected to be one of the fastest growing in the world, while the country's democracy too had been described as one of the best where citizens freely expressed their opinions on issues.

President Akufo-Addo assured the staff and students of BIGBOSS that he was personally committed to ensuring that they were provided with a new school bus to enhance academic work, while he would also ensure that the school benefited from the Ghana Education Trust Fund (GETFund) to help rehabilitate and provide school infrastructure.

The Minister of Education, Dr Matthew Opoku Prempeh, noted that for the first time, enrolment figures in second cycle institutions would increase from about 800,000 to about 1.2 million by September this year.

According to Dr Prempeh, a lot had happened in the education sector under government interventions. They included increases in the capitation grant from GH¢4.5 to GH¢10, as well as more school uniforms provided for needy basic school pupils.

He further intimated that Mathematics revision books were made available recently to students, while day students also now enjoyed one meal a day.

Dr Prempeh said the Double Track System was on course and that without the system, enrolment and contact hours for students could not have increased as they should.

The Minister of Food and Agriculture, Dr Owusu Afriyie Akoto, observed that the Upper East Region was endowed with agricultural potential, for which reason the government was spending $30 million to rehabilitate the Tono Irrigation project.

The Upper East Regional Minister, Ms Tangoba Abayage, indicated that the government was rolling out many social interventions which were already benefiting the poor.

She mentioned some of them as the Planting for Food and Jobs and the Free SHS policy.

The Headmaster of BIGBOSS, Mr Ababu Afelbeik, cited the absence of a wall, school bus and inadequate accommodation facilities as major challenges facing the school established in 1970.

The school, he said, had chalked up successes in the areas of academic, sports and culture.

The President will also visit Binaba, a rural community in the Bawku West District, to attend a durbar of chiefs and people of the area.

He will also pay a courtesy call on the Bawku Naba and meet with Mamprusi elders in Bawku. The President will climax activities on the first day of his tour with a call on the Pusiga Naba, followed by an inspection of ongoing works on the Kulungugu Bridge.