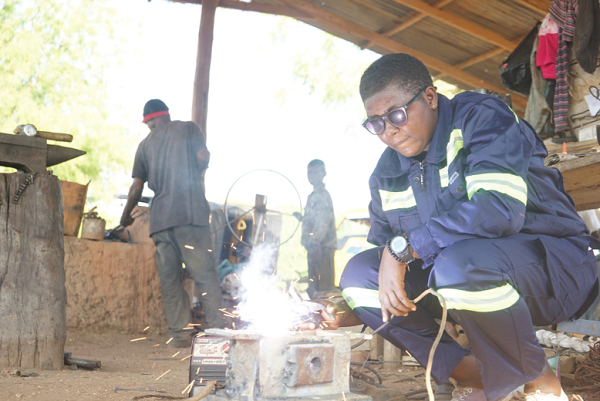 The debate on women’s participation in male dominated economic activities in society has been on for some time now, particularly in the rural part of the country. While some argue that women are equally capable of undertaking men’s task even better, others believe that they are only limited to household activities.

For those who were against women’s increased participation in male dominated economic and social functions, their argument was based on socio-cultural practices and beliefs.

Well, some young women in the Northern, North East, Savannah, Oti and Volta regions have dared to change the age long tradition as they have been enrolled in male dominated professions such as carpentry, masonry, welding, painting, fabrication and glazing, general electrical works, among others.

These girls, who are between the ages of 15 and 19, include pregnant adolescent girls and teenage mothers who have no formal education and school dropouts.

Sharing her story with the Daily Graphic, Miss Hafsah, who is 18 years, said as a lady, venturing into a male-dominated activity was not easy because her friends and community members made fun of her for engaging in it.

“I have been sitting at home for some years now till Savanna Signatures enrolled me in the Girls’ Life Choices programme, even they were making fun of me in the beginning but I am excited to be among the first ladies who would venture into tilling in my community”, she said.

According to her, she would start her own tilling business to earn income to help the family and also be an inspiration to her family and her community, especially the girls in her area.

Another girl, Ms Charity, who enrolled in fabrication in the Tamale Metropolis, said her dream of a brighter future would materialise through the project.

The beneficiaries were selected to benefit from a skill component of Girls’ Life Choices project being implemented by the Savanna Signatures, a non-governmental organisation,  which operates in the Northern, North East, Savannah, Oti and Volta regions of Ghana.

The project, which is being implemented by Savana Signatures, with support from UNICEF and Korea International Cooperation Agency, KOICA, seeks to provide economic empowerment to adolescent girls, educate them on Menstrual Hygiene Management (MHM) and protect them from Sexual and Gender-Based Violence (SGBV).

Training equipment has been supplied to the 500 girls as learning and start-up tools for their various apprenticeships including fees covering all the girls.

According to the Project Manager, Ms Ethel Emefa Ehla, the NGO initially sensitised 34 master trainers to the frameworks within which the skills training for the 500 girls was  going to be carried out and also educated them on the need to create safe and conducive working environments for the girls to thrive in their various skill areas.

“Ordinarily, these trainers would have male apprentices, but for the project, these masters are assigned to adolescent girls, thus the need to introduce the master trainers to best practices suitable for the girl-child.

“Eighty of the 500 girls will be linked to internships/attachments with either the private or public sector. The internship is meant to provide two things; industrial experience and further employment opportunity”, she added.

She urged parents, community leaders, and all stakeholders to support these girls in their various fields and promote the involvement of girls in male-dominated professions to enable them to become economically viable in future.