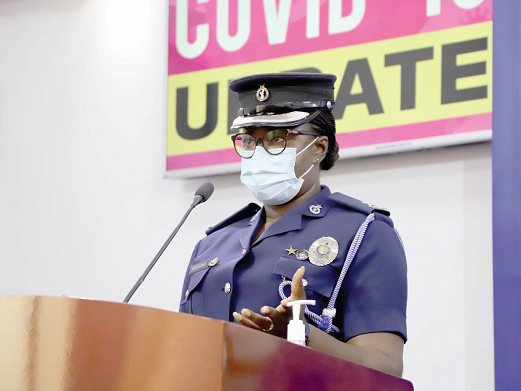 The Ghana Police Service has begun an exercise to randomly stop vehicles carrying two or more people to check if occupants on board are in face masks.

The exercise, which began yesterday, is a directive from the Inspector General of Police (IGP) and is part of moves the police is undertaking to enforce mandatory wearing of face masks.

Addressing the minister's press briefing to give update on COVID-19 in Accra yesterday, the Police Director of Public Affairs, Supt. Sheila Kessie Abayie-Buckman, said the exercise had already begun in some of the regions and was being scaled up to cover the entire country.

Supt. Abayie-Buckman said the police were currently at the stage of sensitising the public and, at the same time, enforcing the wearing of face masks, which was why it was characterised by occasional incidents of arrests.

She said soon the sensitisation phase would be phased out and as such cautioned the public to wear face masks or face arrest and prosecution.

“A police officer in uniform can stop any vehicle carrying two or more people to check if they are in face masks. Anyone found not to be in one will be made to get down,” she said.

She stressed that repeat offenders would not be cautioned but prosecuted.

Supt. Abayie-Buckman said since the President’s directive to the IGP on January 17 to ensure that the wearing of face mask was enforced, the police had arrested 961 people who were without face mask, with Accra having the highest number of 330.

Of the number, she said 484 were given verbal caution while 477 received a written caution.

“If we arrest you in our next step and realise you are a repeat offender, you leave us with no choice than to find the provision under the law to prosecute you,” she said.

She said from April last year to January this year, the police had recorded 1,584 cases of COVID-19 protocol violations, including people not wearing face masks.

Supt. Abayie-Buckman said out of the number, 453 were arraigned and 237 of them were acquitted while 144 were granted bail by the courts and 70 convicted.

She said  further that the police were exploring ways to tighten enforcement at the district level.

“We have started engaging with the assemblies to get them to ensure that wearing of face mask was enforced in accordance with their bye-laws and we hope to see results,” she said.

People who fail to wear face masks in public commit an offence that carries a prison sentence of four to 10 years or a fine ranging from GH¢12,000 to GH¢60,000, or both as contained in the new Executive Instrument (E.I. 164).