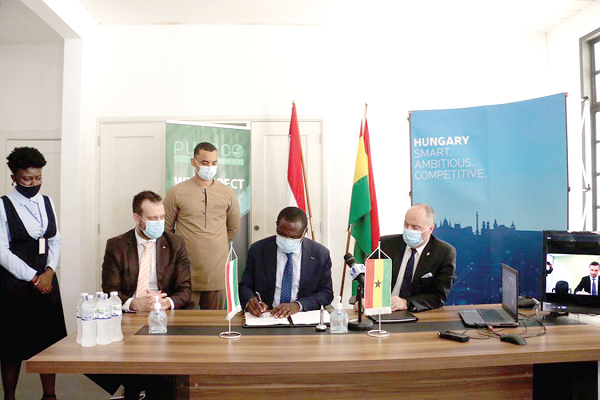 The Jospong Group of Companies has signed a contract worth €50 million with the government of Hungary for the construction of waste water treatment plants in Tamale in the Northern Region and Takoradi in the Western Region.

The projects will be funded by the  EXIM Bank of Hungary.

The Executive Chairman of the Jospong Group, Mr Joseph Siaw Agyepong, signed for his company, while the Hungarian Ambassador to Ghana, Mr András Szabós, signed for his country at a ceremony at the Embassy of Hungary in Accra yesterday.

Already, work is ongoing on a similar project in Kumasi in the Ashanti Region, where the company is constructing a 1,000-cubic metre capacity plant.

Addressing journalists after the signing of the agreement, Mr Agyepong said the projects were expected to be completed within 15 months.

He gave an assurance that once work started, efforts would be put in to complete the projects within the scheduled period.

He described the decision of the government to create the Ministry of Sanitation and Water Resources as laudable, since it would facilitate the realisation of its vision to make the country the cleanest in Africa.

"Ghana is blessed in its relationship with Hungary; such initiatives will help resolve the sanitation challenges in the country," he added.

The Hungarian Ambassador said Ghana-Hungary relations dated back to five years, and that their collaborations had since yielded remarkable results.

He said the construction of the waste treatment plants would put Ghana on the path to achieving SDG Goal 6 of the UN, which is on clean water and sanitation.

The Director of Sanitation at the Ministry of Sanitation and Water Resources, Mr Anthony Mensah, said the ministry was working towards ensuring that President Nana Addo Dankwa Akufo-Addo’s vision of a cleaner Ghana was achieved in due course.