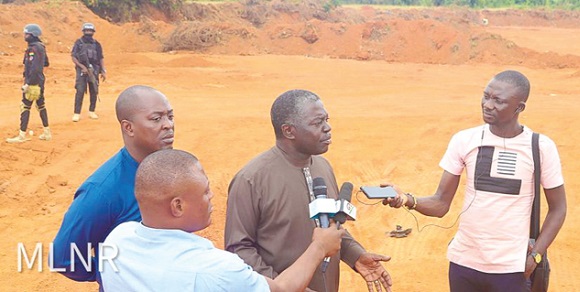 Benito Owusu-Bio, Deputy Minister of Lands and Natural Resources in charge of Lands and Forestry, speaking with some journalists on the illegal sand-winning activities on state lands at Amrahia in the Adentan municipality in the Greater Accra Region
30.5k Shares

The Deputy Minister of Lands and Natural Resources in charge of Lands and Forestry, Benito Owusu-Bio, has expressed grave concern over the continuous destruction of the environment through illegal mining and sand-winning activities, despite concerted efforts made to deal with the menaces.

He said it was worrying that in spite of the fact that the regulatory agencies, such as the Minerals Commission and the Lands Commission, had consistently sensitised the public to the need to protect the land, many recalcitrant people still engaged in activities that destroyed the environment and posed health risks to the public.

He said since it was obvious that some people had failed to respect the laws on the environment, the Lands Ministry and its agencies would go all out to crack the whip on culprits.

He said this during an inspection tour of state lands at Amrahia in the Adentan municipality in the Greater Accra Region yesterday.

The government acquired the 1,381-acre land at Amrahia in the 1960s, mainly for agricultural and dairy purposes.

After many years of little investment, over 150 acres of the land have been encroached upon.

Currently, discussions are ongoing between the government and the pre-acquisition owners for the release of 40 per cent of the land to the chiefs and the families in the area in lieu of compensation, as required by law.

During yesterday's visit to the area, it was discovered that large tracts of the land had been destroyed by illegal sand winners.

The affected land, about the size of three football fields, had been wiped off by the illegal sand winners.

The sand-winning activities had also left residents of the area battling with dust.

Mr Owusu-Bio, who was visibly angered by the development, stressed that the ministry would go all out to crack down on the illegality, and warned that all persons behind the illegal sand-winning activities on state lands at Amrahia to stop with immediate effect,

He stressed that recalcitrant illegal sand-winners would be arrested and prosecuted to serve as a deterrent to others.

"This is government land; why should people be destroying it this way! We have not given anyone any permit to win sand here, so anyone doing it is acting illegally and he or she will be made to face the law," he said.

On the release of 40 per cent of the land to the pre-acquisition owners, Mr Owusu-Bio said the process would be completed in about two months.

He said surveyors had finished survey activities on the land, paving the way for allocation to be made to the various families.

"The surveyors have been able to determine where the allocation to the various families will fall; and I am satisfied with the work they have done. What is left is for the Lands Ministry and the Lands Commission to get the necessary documentation done," he said.

The deputy minister called on the beneficiary families to cooperate with the government for the allocation process to be seamless.

The Executive Secretary of the Lands Commission, James Dadson, said the commission would continue its engagement with all the families to conclude the allocation process.

"All the plans are ready; the demarcation of the allocations from each family has been done, so what we are going to do is get their leadership to come on board for the allocations, then we can proceed to do land titles for them," he added.