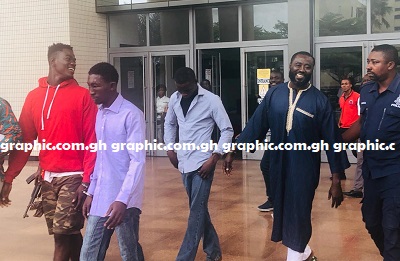 It has emerged that the suspected kidnappers who held two Canadian women captive in Kumasi demanded $800,000 from their families as ransom for their release.

This came to light when six of the suspects were put before the Accra High Court yesterday.

Two others, who were part of eight suspects, originally arrested in connection with the kidnap case, are on police enquiry bail and did not appear in court.

The two were the driver of the vehicle used to abduct the Canadians and the owner of the car.

The Prosecutor, Ms Hilda Craig, a Senior State Attorney, revealed to the court that apart from demanding the $800,000 as ransom, the suspects also smeared blood on the faces of the two girls to show their seriousness.

“In order to create an impression to their families that they had been seriously tortured, the accused persons smeared blood all over the victims and on the floor of the building. They took pictures of the blood-soaked victims and forwarded same to their families in Canada to compel them to pay a ransom of $800,000,” the prosecutor told the court.

The rest - Yusif Yakubu, Abdul Nasir and Seidu Abubakari, aka Mba - are all Ghanaians.
They have been accused of playing various roles in the kidnapping of Miss Lauren Patricia Catherine Tiley and Miss Bailey Jordan Chilly, two Canadians, who were in Kumasi to participate in a youth programme.

The accused persons have been charged with kidnapping.

Affiliations of 'Canadians kidnap' suspects not yet known - Oppong Nkrumah

At Friday’s hearing, the plea of the accused persons were not taken.

Rather, following a plea by the prosecution, the court remanded them into the custody of the Bureau of National Investigations (BNI).

Ms Craig submitted that investigations into the case were still ongoing and, therefore, the police would need the accused persons to assist with the investigations.

Counsel for Abubakari, Mr Nii Quei Amasah, did not oppose the plea by the prosecution but he urged the court to reduce the remand period from three weeks as requested by the prosecutor to a week.

“The resources of the state are huge and, therefore, they can finish investigations within a reasonable period of time,” he argued.

In response, Ms Craig contended that the one week was not enough for the police to complete their investigations due to the complexity of the case.

The court, presided over by Justice George Buadi, decided to remand the accused for two weeks.

The facts of the case as presented by Ms Craig were that, Aghalor who had been in Ghana for some time became a friend to Yakubu in March 2019.

To bring their idea into fruition, the prosecutor said, Aghalor went to Nigeria in May 2019 and recruited Ojiyorwe and Omarsar to be part of the gang.

According to her, the three Nigerians, upon their arrival to Ghana, resided at Ashaiman for some time before they went to Kumasi to meet up with Yakubu.

Ms Craig said on June 4, 2019, the gang, in a car, accosted the two Canadian ladies, who had boarded an Uber taxi at their hostel at Nhyiayeso, a suburb of Kumasi.

They then sped off with their victims to their hideout, which was in an uncompleted building at Kenyasi Krobo, another suburb of Kumasi,” the prosecutor added.

During their captivity, Aghalor contacted the families of the two women and demanded a ransom of $800,000.

Ms Craig told the court that on June 11, 2019, a National Security team, led by Colonel Micheal Opoku, and acting on intelligence, arrested Yakubu.

The prosecutor added that Aghalor, Ojiyorwe, Omarsar and Yakubu mentioned Nasir and Abubakari as members of the gang and the two were subsequently arrested.

Read also: No ransom was paid in exchange for the kidnapped women.