A book documenting the history and story of the Accra Academy School from Jamestown to its current state has been launched in Accra.

Titled “Accra Aca Bleoo: the history of Accra Aca from Jamestown to Bubuashi”, the 726-page book tracks the strides of the school from its formation stages at Jamestown in 1931, detailing every developmental phase of the school to date, and how it has survived the different epochs of the country’s educational system.

The insightful and historic book provides an elaborate history of the school by bringing together compartmentalised sources of information on the school into a single compendium of facts that settle the indistinct and blurring stories about the school’s history.

With over 300 pictures to give readers a good understanding of the history of the school, the book also gives readers a historical background of the advent of education in the then Gold Coast and how it has contributed to the country’s development.

Described by many as the authoritative source or reference on the school’s history, the book also recounts the aspirations and achievements of successive administrations of the school and how they overcame the challenges of their time and influenced the character of their students.

It features inspiring stories of the founder members and everyone who had made an impact on the school’s transformation.

Among personalities who graced the launch were the headmaster of the school, Emmanuel Ofoe Fiemawhle; the chairman of the school, Justice Jones Mawulorm Dotse, currently a Justice of the Supreme Court; the Omanhene of the Agogo Traditional Area, Nana Akuoko Sarpong; the Catholic Metropolitan Archbishop of Cape Coast, Most Reverend Charles Gabriel Palmer-Buckle; the Deputy Minister of Education, Rev. Dr John Ntim Fordjour, among other high-profile personalities and old students. 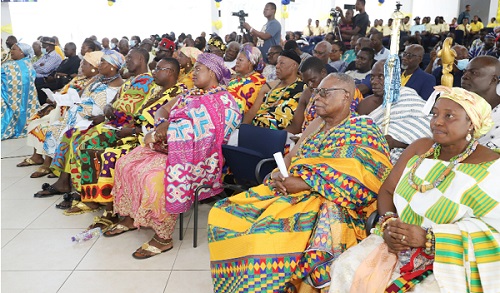 Some traditional leaders and members of the public at the launch of the book. Pictures: GABRIEL AHIABOR

Rev. Dr Fordjour said the launch of the book marked the 90 years of impact, excellence, sacrifice and struggles that the school had gone through.

One main challenge, he said, was the non-documentation of very important milestones, stressing: “Accra Academy has such a great success story, and this story could not have gone undocumented”.

The school, he said, had nurtured some of the best and brightest boys in the history of the country, and urged that the standard of excellence be maintained.

"This standard of excellence must continue, the standard of raising very strong boys, brilliant, creative and innovative young men who are going to boldly stand in the face of the complex challenges that we have today," he advised.

Stressing on the fact that students had bright futures ahead of them, Rev. Dr Fordjour advised students to gain inspiration from the stories of the founder members, the youngest of whom was 29 years, and strive to be the best they could be.

In a review, a former Chairman of the National Media Commission, Nana Kwasi Gyan-Apenteng, said the book contained all information pertaining to the school, right from the founding to its current state.

The book, he said, contained very detailed and minute information about the school with no aspect of the history left out, and that it captured the very essence of life in the school.

"You can read it as a narrative and enjoy it, and as a reference; it is one of those books that we would keep on going back for," he said.

The book, he said, gave an illuminating idea about the contribution of not just Accra Academy, but of education to the nation's development.

The author of the book, Simon Ontoyin, a past student of the school, explained that he was inspired to chronicle the history of the school after a search run on Wikipedia revealed no information on the school despite its status.

He urged the public, particularly the old boys, not to hesitate to provide further suggestions which would help in updating the book.