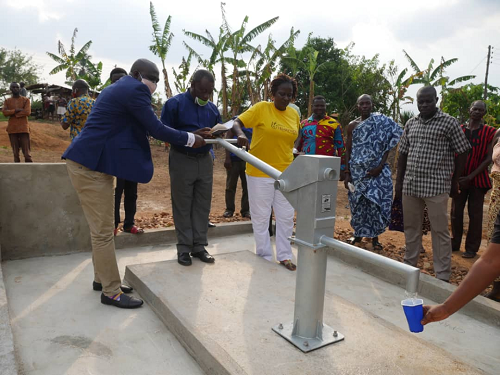 Madam Gladys Afua Kwatema Yamoah, CEO of Action Against Rural Poverty(right) being assisted by Mr Alex Inkoom(left), the DCE of Asene-Manso-Akroso District to commission one of the boreholes.
30.5k Shares

The Africa Heartwood Project, a United States of America based Non-Governmental Organization (NGO) with support from its donors has constructed boreholes for seven rural communities in two districts in the country.

The projects, which were executed by Action Against Rural Poverty (AARP), a Ghanaian partner based in Agona Swedru had the objective to provide potable water to the beneficiary rural communities in the wake of the spread of the COVID-19 pandemic.

The projects, constructed at a cost of US$35,000(GH₵185,500 ) which started in January 2020 and completed in April same year were undertaken through the benevolence of donors from the USA, namely, Friends of Africa Heartwood, Cocoa Community Project, Michael Foundation and the Planet Therapy.

Hitherto, residents of the beneficiary communities relied on streams and other water sources for their daily activities which exposed them to water borne diseases. School children on a daily basis were compelled to comb around every morning and evening to fetch water to be used at home.

In the dry seasons in particular, residents had no option than to walk for several hours in search of water for their daily activities.

Therefore, the provision of the boreholes for them is a huge sigh of relief to the people as it would go a long way to improve the quality of their lives`.

Provide water for the poor

In a speech read on his behalf, the Chief Executive Officer of Africa Heartwood Project, Mr Andy Jones indicated that the vision of the NGO is to ensure that many rural communities were provided with water to improve their standard of living.

He mentioned that water is one of the basic necessities of life which must be readily available especially to the rural poor and that the mandate of Africa Heartwood is to increase access to water supply to rural dwellers.

He stated that the NGO is poised and committed towards the provision of potable water supply to the underprivileged in the society, “I wish to assure you that Africa Heartwood Project would continue to solicit for support from donors to construct more boreholes rural communities across the country.

He admonished the residents of the communities to take good care of the projects and ensure its regular maintenance so as to prolong its lifespan to benefit future generations, stressing that “I wish to implore you to find innovative ways to regularly maintain the boreholes to stand the test of time”.

He noted that “thankfully the provision of the boreholes had come at a time that water had become essential in the fight against the COVID-19 pandemic”, and therefore urged the residents to take advantage of the availability of water in their respective communities to ensure regular hand washing among themselves.

The Chief Executive Officer of AARP, Madam Gladys Afua Kwatema Yamoah, for her part, thanked the Abura Asebu Kwamankese and Asene-Manso-Akroso district assemblies for their support towards the speedy completion of the projects.

She added her voice to the call for the residents to institute an effective plan to maintain the projects so that they would not go back to their old ways of walking hours in search of water.

She stated that AARP had since 2007 constructed 36 boreholes in some rural areas and would continue to partner other NGOs to increase access of water, particularly for under-served communities across the country.

The Coordinating Director of Abura Asebu Kwamankese District, Mr David Owusu Ansah urged the beneficiary communities to properly care for the project to encourage the donors to execute similar projects in other areas.

For his part, the District Chief Executive for Asene-Manso-Akroso District, Mr Alex Incoom, thanked the donors for the projects since it would have taken the assembly a longer time to provide the communities with water.

On behalf of the seven communities, Mr Kwasi Assad of Abura Oframoase and Mr Kwasi Nyame, thanked the donors for coming to their aid.