Admission of 10 students to GSL: I didn’t seek approval but was in interest of school - Opoku-Agyemang 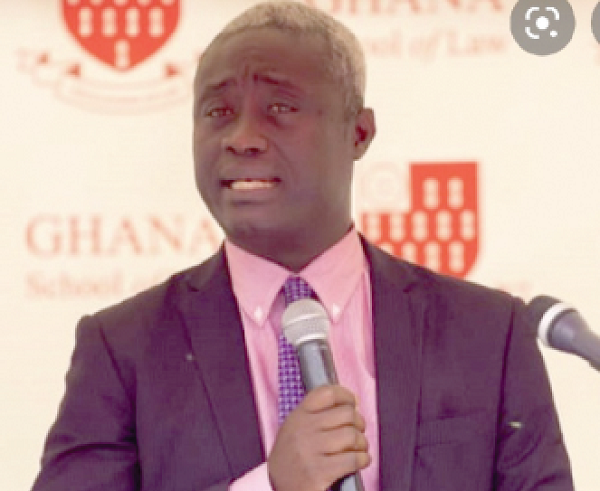 A former Acting Director of the Ghana School of Law (GSL), Maxwell Opoku-Agyemang, has said admission of 10 students to the school under a concessionary arrangement was not done in secrecy.

He said although he did not seek the approval of the General Legal Council (GLC) before the admission of the students, the issue was brought to the attention of the chairperson of the Examinations Committee while other key members of the council were also aware due to discussions on the issue prior to the admissions.

According to him, he was aware of various media publications and discussion on his suitability or otherwise to be recommended for an appointment as a Justice of the Court of Appeal.

“The basis for these discussions is the alleged unlawful admission of 10 students into the Ghana School of Law. For the records I have not been officially notified or contacted about nomination for appointment to the Court of Appeal, neither have I been served with any court process or copies of the multiple petitions circulating on social media,” he said in a statement issued in Accra last weekend.

Mr Opoku-Agyemang further stated: “Much as I do not begrudge anyone who feels offended by my decision to introduce a concessionary admission policy at the Ghana School of Law, leading to the admission of 10 students without approval of the General Legal Council, it is my wish that the issue be considered dispassionately and in consideration of the service I have rendered to the Ghana School of Law.”

However, the statement said it was of public knowledge that he (Opoku-Agyemang) had been against the said restrictions and had always advocated for the opening of more opportunities for LL.B. holders to achieve their heart’s desires.

It said apart from the restrictive nature of admissions to the GSL, the GLC also operated “a zero-concession admission policy” which meant that no concession whatsoever was extended to the wards of key stakeholders, including members of staff and faculty.

“As a matter of fact, this policy was used to deny, not only my ward but wards of other lecturers and staff, admission to the GSL after obtaining scores ranging from 46 to 49 per cent. I considered this policy as unfair, especially on my part after 23 years of dedicated service to the school,” the statement said.

The Concessionary Admission Policy, according to the statement, was to offer concessionary admissions to wards of faculty, staff and other key stakeholders without compromising the meritorious admission system while the Full Fee-Paying System was meant to stem the tide of Ghanaian students travelling to other jurisdictions, notably the Gambia to pursue professional legal education.

“It was meant to reduce the cut off point for those desirable and ready to pay the full cost of the education as is done in all public universities for their sought after programmes,” it further explained.

“Admittedly, the offer of the 10 concessionary admissions was made without the approval of the General Legal Council but was not done in secrecy. These admissions were offered without any ill-motive or for any personal gain but in the interest of the Ghana School of Law,” the statement said.

Giving further details, it said in the 2020/2021 academic year, he managed to convince the GLC to admit all students who scored 50 per cent and above, something that culminated in the admission of 1,045 students.

“The admission of this number of students led to the introduction of the innovative triple track system of classes which created the potential to admit almost 1,100 students.

According to the statement, one of the admissions paved the way for the release of an entire building at Kwame Nkrumah University of Science and Technology (KNUST) which now served as the Kumasi Campus of the Law School.

“This enabled the school to increase the intake in Kumasi from 50 to over 200, as well as securing places for a library, staff common room, administration facility and a canteen for the students. I must stress all the decisions taken in my one year as Acting Director were in the best interest of the school and students,” it stated

According to Mr Opoku-Agyemang, the GLC on or about July 2021 established a three-member committee to investigate allegations of admission of non-LLB holders to the GSL, as well as admission of students who did not write the entrance examinations, and the payment of monies for admission to the Law School and other issues, and that the committee found all the reportage as false except the admission of the 10 students on concessionary basis.

Furthermore, it said the GLC accepted the recommendations of the council that the 10 students admitted without approval of the council be withdrawn from the school, which was duly carried out.

“Further, the council has set up a three-member Disciplinary Committee to conduct disciplinary hearings against myself, the registrar and the deputy registrar of the school on charges of insubordination and acting improperly in our office contrary to the provisions of the Public Service Policy and Framework Manual for Public Servants. The Disciplinary Committee is yet to commence its proceedings let alone pronounce any sanctions,” it said.