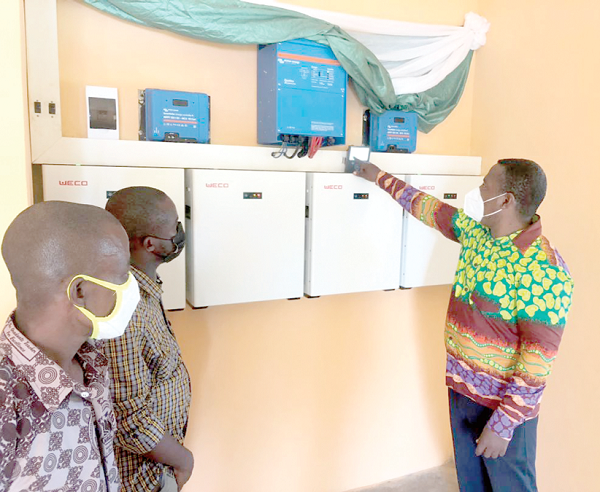 Yinson Ghana, an oil and gas service company, has provided an off-grid rooftop sustainable solar system for the Anlokrom in the Pretea in the Ahanta West Municipal Assembly (M/A) Basic School in the Ahanta West of the Western Region.

The basic school, which hitherto, did not have electricity, struggled to teach examinable subjects such as information communication and technology (ICT).

The company, which is also responsible for the operation and maintenance of the oil production platform, FPSO John Agyekum Kufuor, wired and provided the washroom and each of the school’s 12 classrooms with lights, sockets and ceiling fans, as well as 20 security lights for the school’s compound.

For the comfort of the teaching staff, the company in addition, supplied a refrigerator and fire extinguishers for each of the three classroom blocks.

The Headteacher of the school, Mr Benjamin Yankey, said the support came as a great relief and added that “before, the teachers only take the pupils through the theory and not the hands on training using the computer.”

He said at present they had wired the entire blocks hooked to the 10KW solar system with accessories, light, sockets and fans to enhance teaching and learning.

Mr Yankey said the gesture by the company would improve the ambiance for the teaching and learning in the school.

“I must say that the solar system provided for us was designed to provide uninterrupted power with the capacity to enable us to use television set, fans, a refrigerator and computers independently off the national grid and without paying electricity bills,” he said.

The headteacher said the lack of electricity in the school was one of the setbacks for the ICT subjects require internet connections and electricity to help students pass their ICT examination, which was compulsory and examinable subject for all.

“With the solar energy, it would support the teaching of the schoolchildren especially those in the finals ready for Basic Education Certificate Examination (BECE),” he said

He said the school blocks in the community cluster were built without electrical wires, “and, therefore, when the company initially donated some computers to us to support ICT training it realised we did not have electricity; hence, the decision for solar energy for us.”

The Corporate Social Responsibility (CSR) Coordinator of Yinson Ghana, Mr Edward Mensah, said the school was located within its Western Regional operational base in Kejabril and was not connected to the national grid.

“This is a public school which should not be supported by government alone but individuals, philanthropists, institutions, among others,” he said.

The Chief of Pretea, Nana Kofi Yankom IV, thanked Yinson Ghana for supporting schools in the area and also called for maintenance culture for the solar system.