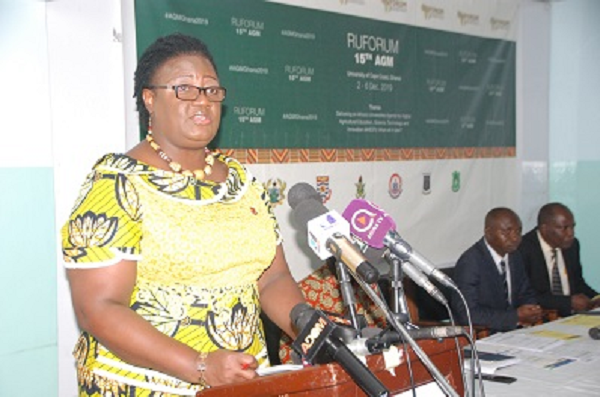 The Pro Vice-Chancellor of the University of Cape Coast (UCC), Prof. Dora Edu-Buandoh says the effects of the COVID-19 pandemic has put a strain on the budgets of institutions of higher learning and called for innovative ways to increase inflows.

She indicated for instance that the institutions were now budgeting for Personal Protective Equipment (PPE) and other non-traditional expenses which were not part of their budgets, saying without new innovative ways to support their budgets, they would not survive the challenges.

Prof. Edu-Buandoh was speaking at the first Sam-Creedy-Komeh Ababio public lecture held by the Komenda College of Education last Thursday.

The lecture, named after a renowned statesman and teacher Papa A. B. Sam, the first principal of the college, Mr Alfred Lawrence Creedy, a British national and a one-time Omanhen of Komenda Nana Komeh Ababio VI, was to honour the founding fathers of the college.

Prof. Edu-Buandoh, who herself is an old student of the college, said the college's stakeholders including management, the Methodist Church, alumni and students must be bold in seeking support from donor institutions and philanthropists to build the college into a formidable one that could attract quality staff, undertake research, attract more students and to help the college set the pace for teacher education in the country.

She initiated a research fund to support research work in the college as it worked towards achieving the status of a university college status which raked in about GH¢50,000 in contributions.

The Principal of the College, the Very Rev. Kwesi Nkum Wilson said from a humble beginning with the first batch of students on March 11, 1948, the college had grown to a current student population of 1,432.

A member of the Council of State, Prof. Ato Essuman, who chaired the function, in his remarks, eulogised the founding fathers of the college for their vision and foresight and urged the current administration to take the college to greater heights.

The occasion was used to inaugurate a modern college gate and a refurbished ICT laboratory.

The Komenda Training College, now the Komenda College of Education, was established on the premises of the barracks left by the fleet Airforce of the British Navy after the second World War.

Through the efforts of Mr A.B. Sam, the then regent of Komenda, the infrastructure was leased to the Methodist Church Ghana in 1947 to be used as a Methodist Teacher Training College. The government of Ghana later renovated the buildings to make the old barracks suitable for academic work.

On March 11, 1948, the first batch of 40 men were enrolled to start a two-year Teachers' certificate "B" programme. In 1952 ,however, the college became a co-educational institution with its first batch of 30 women.

Currently, the college offers a four-year Bachelor of Education Programmes in Early Childhood, Primary Education, JHS among others.