Some metal grids that cover drains in some parts of Accra have either been damaged or stolen.

Some residents of Adabraka told The Mirror the open drains posed a danger to road users, especially at night when visibility was low.
When this reporter visited the area last Thursday, she observed that the situation had compelled residents to use objects such as cardboards, plywood and rims of vehicle tyres to replace the metal grids which were mostly found in the middle of pedestrian walkways.
Some of the metal grids had been damaged, while others were old and rusty. Some drains with concrete slabs on the shoulders of the road were uncovered.
On the Additrom road, a trader, who gave her name as Esi, said the situation was worrisome.
“I am worried about the schoolchildren who use this route. Their safety is compromised. One day will be a bad day. City authorities should, as a matter of urgency, replace the damaged metal grids and also ensure that the exposed ones are covered,” she advised.
Another trader, Aunty Yaa, attributed the development to the activities of scrap dealers. 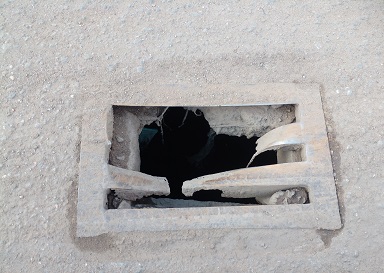 A drain with a damaged grid cover
“Whenever the metal grids are replaced, they are stolen. Some scrap dealers remove them at night. So, for some time now, they haven’t been replaced. The situation endangers road users. I am appealing to the assembly to come to our aid,” she appealed.
A resident, called Aboagye, expressed his disgust about the exposed drains.
“The situation is serious. For those of us who use this route at night, we have to be extra vigilant or we might end up with a broken leg because the drains are very deep,” he said. 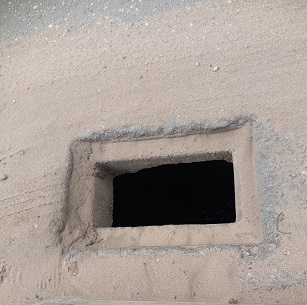 This exposed drain puts motorists at risk
Some traders, who operated shops in the area, had also been compelled to replace the metal grids with wooden slabs at their own cost since the situation endangered their customers and other road users.
On the dual carriage stretch from the Graphic Road to Kaneshie, most of the slabs covering the drains on the outer lanes of the road had been removed.
The situation was same at Kingsway in Accra where  some drains have been covered with wooden slabs and stones.
Residents say they want city authorities to address the situation as the open drains expose them to danger.