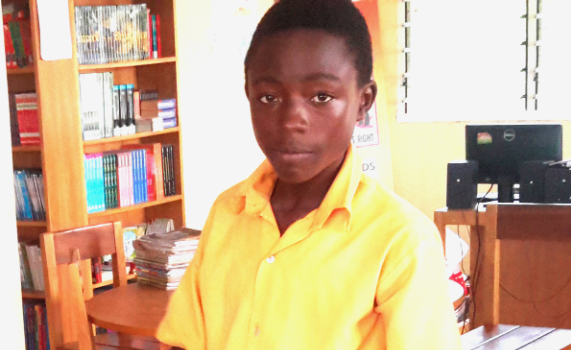 He is the toast of his teachers, classmates and friends at the Otinibi M.A. Basic School at the La Nkwantanang Municipality in the Greater Accra Region.

The reason? He’s simply creative and is very good at what he sets out to do.

Thirteen-year-old Bright Selikumah, a Form One student, has dazzled the staff and students of his school with his natural technical skills.

Bright, who lives with his parents at Amrahia in the Adentan Municipality and walks about four kilometres to and from school each day, says he is not deterred by the journey he makes every day because he believes education can create more opportunities for him.

His technical skills have enabled him to produce three items that have become the topic for discussion in the community that the school is located. The items are a radio set used by teachers in the school’s staff common room, a toy car and aeroplane, fitted with a motor and batteries, which enable them to move and take off.

The radio is made of a wooden box with a small speaker, a switch for changing frequencies, and a USB slot for pen drives to play music. The slot can also be used to charge mobile phones. Additionally, the radio has an antenna for good reception and lights for illumination in the night. It is also powered by a small solar panel.

The toy car is a model 4X4 made with metal covered with cardboards. It also has a motor and is powered by a battery for mobility.

The toy aeroplane has white cushions with two propellers; one in front and the other on top.

Selikumah told the Junior Graphic that he developed interest in creating electronic gadgets when he was much younger while he played with his elder brother.

“The idea just comes and I feel challenged that I should try this or that. Nobody taught me to design the radio, the car or the plane. I created them myself,” he said, adding that “if I get assistance from others I would be able to do more.”

According to him, he would like to produce more gadgets, and pleaded with the public to help support him in any way possible. “I enjoy doing what I am doing now and want to do more,” he said.

Mr Confidence Seloame, who discovered Bright’s ingenuity during an Integrated Science class, noted that “he came to this school when he was in Class Six in 2014. We had a practical lesson on simple electrical circuits and by the time I realised he had fixed a motor which was working.”

He said when he found out about Bright’s technical abilities, he began to teach him the various electrical items and their functions, including the positives and negatives.

Apart from the current items he has produced, he said, Bright had designed  traffic lights and other electronic items, and added that ”now he needs a professional who would help him to improve on what he does because he is gifted with some technical skills.”

His Class Teacher, Mr Christian Adinkrah, said he was currently making efforts to contact the Founder and Leader of the Kristo Asafo Mission, Apostle Kwadwo Safo, to enable Bright to go for an attachment training at his manufacturing site during this long vacation.

“He has discovered his talent at an early age and must be encouraged and assisted because this is how great inventors start.

“Theoretically, Bright is an average student but technically, he is an excellent student. We are now trying to see how he can improve on finishing his works.”

Mr Adinkrah said during the municipality’s culture and science exhibition programme, the items made by Bright would be put on display. He was hopeful Bright would in future gain admission to a technical school and improve on his talent.