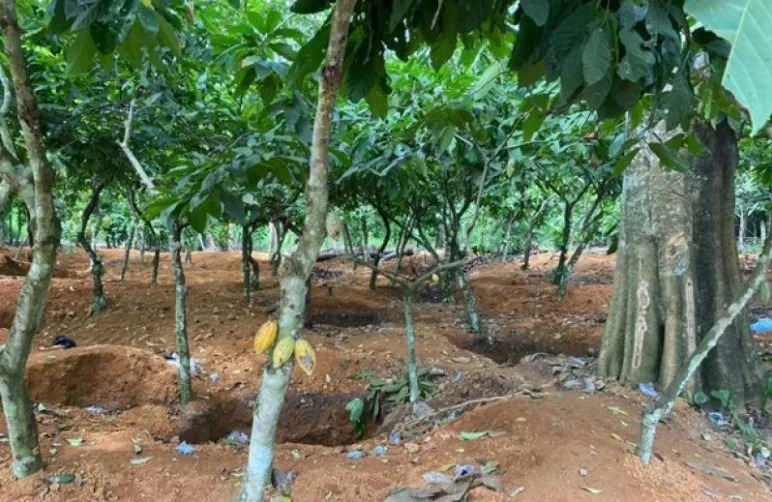 Small-scale gold mining existed in Ghana as far back as the eighth century as a household economic activity.

People mined for gold on small-scale along the coastal areas, justifying the colonial name of Ghana: The Gold Coast.

The Minerals and Mining Act, 2006 (Act 703) of Ghana defines small-scale gold mining operation as the mining of gold by any effective and efficient method that does not involve substantial expenditure by an individual or group of persons not exceeding nine in number or by a co-operative society made up of 10 or more persons.

According to the World Bank Group, Small-scale mining is largely a poverty-driven activity, typically practised in the poorest and most remote rural areas of a country by a largely itinerant, poorly educated populace with few employment alternatives.

The industry is getting increasingly destructive. Fears have been expressed that illegal small-scale gold mining in Ghana might be a resource curse rather than a blessing.


Certainly, the greatest casualty of illegal small-scale gold mining in Ghana is the environment. The environmental impacts of galamsey are well-documented in Ghana.

They include land degradation, destruction of flora and fauna, air pollution and heavy metal contamination of the soil and water.
By stripping the land bare of vegetation, top and sub-soils, open cast galamsey impoverishes the land and renders the soil prone to erosion. The dredging and washing of alluvial gold in rivers and streams are the major causes of water pollution in Ghana.

Heavy metal pollutants released into the environment inhibit biological activity, especially at higher concentrations, with the sensitivity being species dependent. Some metals form compounds that can be toxic, carcinogenic or mutagenic, even in very low concentrations.

Loss of livelihoods of farmers in communities invaded by illegal small-scale gold miners is an important economic consequence of galamsey. Many farmers in the major galamsey-prone regions of Ghana are settler farmers.

They have no right over the lands they cultivate. Whenever the owners of these lands decide to cede them for mining, the settler farmers must move out, with or without compensation, depending on existing agreement or customary practices governing the use of such lands.

This leads to displacement and loss of livelihood. Even where compensations are paid, they are often made to pay for relocation and acquisition of new lands for farming.

Some of the farmers are illiterates, unable to practice any other trade in a sustainably profitable manner, making a shift in occupation to other employment opportunities very difficult.

The shifting of farmlands to mine lands creates local food deficits and food price hikes, since the shortfall has to be sourced from distant towns at exorbitant prices.

The operators, sometimes, divert streams and river courses, depriving downstream users of their sources of water. Fish and other aquatic organisms’ die-off is common, forcing fishermen to abandon their source of livelihood, which may result in less food availability in the affected communities.

The influx of foreign illegal miners such as the Chinese, increases human population in the galamsey areas, putting further pressure on food supplies and raising the cost of living.

Agriculture is critically important to the attainment of the global goals of poverty reduction (UN-SDG 1) and food security (UN-SDG 2) in a more sustainable way.

The soil is the most important part of land in agriculture because it is the primary medium for the growth of crops (food and fodder).

As the science of agriculture developed, plant nutrients were identified as essential components of soil health, at least with respect to sustaining biological productivity.

Soil health is the capacity of a soil to function within the ecosystem and land use boundaries, to sustain biological productivity, maintain environmental quality and promote plant and animal health.

In the Ghanaian experience, the adverse impacts of galamsey by surface mining method include: deforestation, reduction of soil fertility through stripping off top and sub-soils.

The liberalisation of the mining sector, which aimed among other things to formalise, harmonise and mitigate the adverse impacts and effects of illegal small-scale gold mining in Ghana has thus failed, and small-scale mining laws no longer respond effectively to the realities of the sector’s activities.

The writer is the Registrar, Chartered Institute of Agriculture Ghana (CIAGH)