Stonebwoy crowns himself King of Dancehall at Asaase Sound Clash 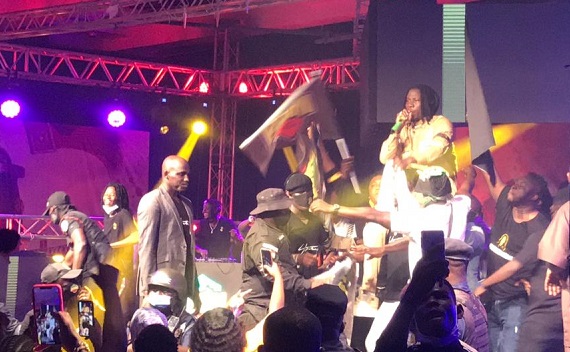 Stonebwoy was held aloft by his fans
30.5k Shares

Between them, they performed 80 songs but that was not enough to determine who was the Best Dancehall artiste between Stonebwoy and Shatta Wale at the Asaase Sound Clash on Saturday, September 12, until Shatta chickened out before the crowning.

Organizers of the highly anticipated event, Asaase Radio had stated that the winner would be announced at the end of the contest but Shatta Wale left the venue after performing his last song Already.

An excited Stonebwoy, who knew he had won the competition after four rounds of battling Shatta Wale, asked his Bhim fans to carry him while they jammed to his Putuu song.

The event started at 10 p.m. with a wonderful performance from MzVee who sang Natural Girl, Come And See My Moda among other songs.

Up next were Dancehall artistes Ras Kuuku and Kamelyeon who battled it out on stage. Ras Kuuku was no match for Kamelyeon who took all the applause for his ragga and freestyle.

Although Ras Kuuku tried to contest him it was clear that he couldn’t and in his efforts he dislocated his arm and was unable to continue performing.

DJs on the night kept the patrons on their feet with good Dancehall songs while Shatta Wale and Stonebwoy prepared to get on stage.

Shatta Wale finally arrived on stage with his 10-member crew. He comfortably sat in his chair and started eating finger foods and drinking juice while waiting for Stonebwoy so the clash could start.

After 20 minutes of waiting, Stonebwoy arrived in a mask arrives with two bodyguards.

Without wasting time, emcee Root Eye and his colleague kickstarted the show with a coin toss to decide who went first.

Shatta Wale, who had DJ Vyrusky as his personal DJ, started with his popular song Dancehall King then Stonebwoy came on stage to perform Come From Afar.

The format was that they would both perform 40 songs after which the judges, with the help of the audience, would choose the winner.

The two acts have laid claim to the Dancehall King title

The competition became intense when they both started dropping their hit songs one after the other. During their performance, both artistes told their fans they were the king of Dancehall. The audience couldn’t help laughing when Shatta Wale said Stonebwoy was a local champion who does useless songs.

Stonebwoy on the other hand said Shatta Wale’s songs were nothing to write home about. The event was interesting from the beginning to the final stage when the MCs asked both artistes to drop their last two songs.

After Shatta dropped Already he left the stage making Stonebwoy’s fans hoot at him. Stonebwoy quickly grabbed the mic and said the best Shatta Wale could do was to run away because he knew he would lose.

After dropping Putuu, his fans carried him on their shoulders signifying that had carried the night.