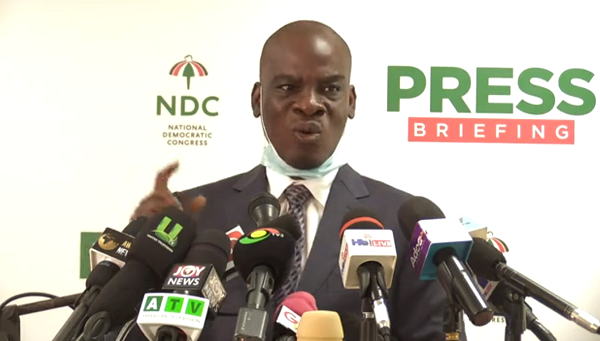 The Minority in Parliament intends to write to the London Stock Exchange (LSE) and the Financial Conduct Authority regarding concerns they have over the Agyapa Royalties Investment Ltd, a special purpose vehicle (SPV) which the country hopes to use to float shares before the end of the year.

Addressing a press briefing today (September 1, 2020), in Accra, the Minority Leader, Mr Haruna Iddrisu said the opposition was concerned about the lack of transparency and conflict of interest which it says "runs through the structuring of the agreement".

He also reiterated the position of the flagbearer of the NDC, Mr John Mahama that the party would not honour the terms of the agreement if they win power.

"We will, after today's press conference, put the London Stock Exchange and the Financial Conduct Authority on notice that this agreement does not meet the required due diligence and transparency, and a substantial level of conflict of interest runs through the structuring of the agreement. The Agreement, is, therefore, tainted with some corrupt acts," Mr Iddrisu said.

"The Minority wishes to state emphatically that the SPV and its accompanying agreements as structured by the current Government is not just opaque but inimical to the interest of the Republic of Ghana. We, therefore, wish to completely disassociate ourselves with the proposed relationship agreement and subsequent flotation of shares on the London Stock Exchange further serve notice that a future NDC government will have no choice but to review the Relationship Agreement and the other accompanying approvals".

Mr Iddrisu said the decision to mortgage the country's "future mineral royalties in perpetuity is grossly inimical to the interest of the people of Ghana".

"This deal fails to enhance public welfare. Our analysis shows clearly that Ghana stands to lose billions of United States Dollars in revenue as a consequence of this illegal transaction.

"This is because annual gold royalties from the mining sector amounts to about USD200 Million on the average. It makes no economic sense, therefore, to mortgage these receivables to an opaque Special Purpose Vehicle (SPV) in exchange for an upfront amount of just US$500million".

He added that incorporating Agyapa in Jersey (in the Channel Islands) could elevate Ghana’s risk of being listed as money laundering jurisdiction by International bodies such as the European Union.

Mr Iddrisu further stated that tax havens are generally known for their lack of transparency matters of corporate governance such as disclosing beneficial ownership of the shares of companies.

"Ghanaians will recall that in May 2020, the European Union placed Ghana on its Anti-Money Laundering List (AML) but deferred the implementation date to October 1, 2020, due to the Covid-19 pandemic. By setting up a sovereign wealth fund in a tax haven, the Government of the NPP significantly elevates the risk of Ghana being considered as a money-laundering jurisdiction. This is because individuals and businesses use tax havens such as Jersey to hide their income and wealth so as to avoid payment of taxes and general regulatory scrutiny of their business deals".

The Minority also wants to know the amount of money that was paid to all entities involved in the transaction.

The government passed the Minerals Income Investment Fund Act, 2018 (Act 978) with the key objective of maximising the county’s mineral wealth for the benefit of Ghanaians, while ensuring that receiving royalties from gold mining companies is sustainable.

The law was amended a couple of weeks ago to enable it to incorporate subsidiaries and use it as an SPV to do business across the world.
The parliamentary approval also included approvals of four other related agreements among the MIIF, the SPV and other entities with which it would have transactions.

The SPV is Agyapa Royalties Ltd, initially incorporated as Asaase Royalties Ltd, which has been incorporated in a British channel island, Jersey, where it will enjoy tax reliefs on transfer of dividends and other concessions that allow it to retain much of the incomes it generates.

It will later list on the LSE, but the government, through the MIIF, will retain at least 51 per cent, while a subsidiary of Agyapa, ARG Royalties Ltd — to be responsible for channelling the royalties to its parent company — will be listed on the GSE, with the government maintaining a similar shareholding structure.

But many analysts and political figures have criticised the transaction and alleged that it is meant to allow a few individuals to have control over the country’s mineral royalties for personal gain.