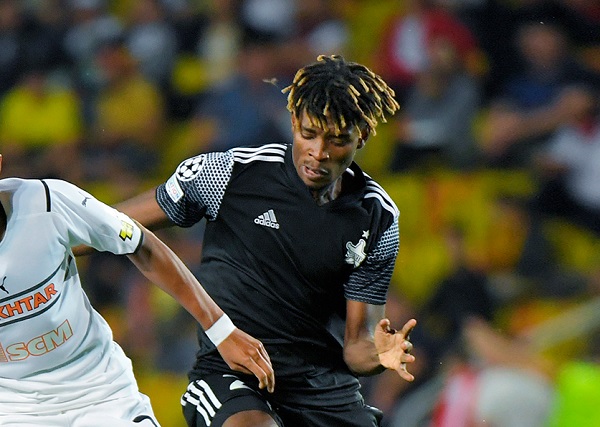 Ghanaian midfielder Edmund Addo made his maiden appearance in the UEFA Champions League on Wednesday starring for FC Sheriff in a historic 2-0 win over Shakhtar Donetsk.

The Moldovan club is playing in Europe’s top-tier competition for the first time after qualifying through the play-offs.

In a group that also contains Real Madrid and Inter Milan, Sheriff got off to the perfect start as they beat the Ukrainian side Shakhtar, who could not convert any of their 21 shots.

At the heart of that defensive resolve and transition was Edmund Addo, who playing in the centre of midfield made two made timely interventions to prevent Shakhtar Donetsk from recording a goal.

The 21-year-old cleared a cut back pass in the 49th minute to deny Shakhtar Donetsk an equaliser after Mali striker Adama Traoré had given Sheriff the lead with a wonderful volley in the 16th minute.

In the 77th minute, Addo challenged Shakhtar midfielder Mykhaylo Mudryk to get a foot on the ball in the 18-yard box which resulted in a corner.

He also prevented a consolation goal for Shakhtar after Guinea international Momo Yansané had doubled their advantage through a powerful header in the 62nd minute.

Addo however had to receive medical attention in the 81st minute after going down awkwardly in between two Shakhtar players. This resulted in his substitution in the 85th minute.

Sheriff FC moved to the top of Group D ahead of Real Madrid by virtue of superior goal difference and three points above Inter and Shakhtar Donetsk. Their next group game is against Real Madrid at the Santiago Bernabeu.