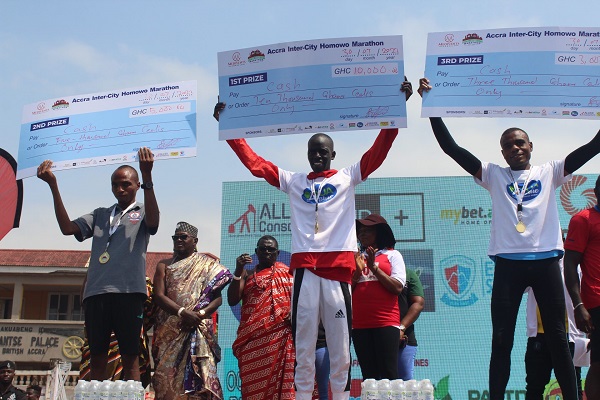 It was a feisty 21km race with hundreds of participants, but Tirop clocked an impressive 1:04:45 hours to become the first male athlete to win a marathon and a GH¢10,000 ultimate cash prize.

Ghana's Koogo Atia nearly pulled off a stunning finish during the race but could only settle for the silver medal, clocking a time of 1:04:47 hours.

It was a dominant performance from the Kenyans, as Dennis Tumuti took home the bronze medal with a season's personal best of 1:05:37 hours.

In an interview after his victory, Tirop revealed that it was his first international competition and that he was delighted to emerge victor of the race.

"I am very delighted to win my first major title. It was my first time running in Ghana and despite the weather conditions, I emerged the winner so I am happy.

"He (Atia) gave me a tough competition, but I stood my ground and edged him at the finish point," he said.

In the women's category, one of Ghana's finest long-distance runners, Lariba Ska Juliana, made Ghana proud by edging Kenyan's Chebet Zeddy to win gold and a GH¢10,000 winner’s prize.
It was a keenly contested race in the women's category, but Lariba's time of 1:17:25 hours was enough to beat Zeddy, who clocked 1:17:32 hours while Ghana's Titi Rosina settled for bronze.

Speaking at the closing ceremony of the race, Elizabeth Kwatsoe Tawiah Sackey, the Chief Executive of the Accra Metropolitan Assembly, congratulated the athletes on their tremendous show of sportsmanship during the race.

She commended the organisers, Medivent Consult, for putting up a great running showpiece, having also thanked the Ga Traditional Council for their support.

"The Accra Inter-City marathon has come to stay and it will be held every year as part of the Homowo festivities, which seek to promote peace among the Ga people.

"This kind of sporting activity does foster peace, which aligns with the overall objective of the Homowo festival. My administration will ensure the success of subsequent events and will render our support for their growth," she said.