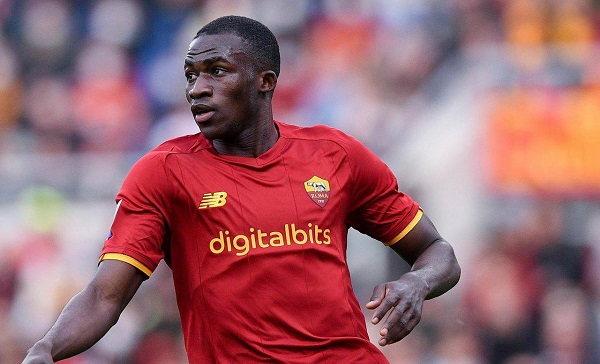 AS Roma striker, Felix Afena-Gyan, is one budding talent who is waiting to explode on the international stage following his sterling performance in his Black Stars debut in the World Cup play-off against Nigeria in March.

Based on that display, one can confidently say that he has earned a permanent spot in Coach Otto Addo’s squad heading to the Mundial in Qatar in November-December.
The 19-year-old burst onto the limelight after coming off the bench to score a brace for AS Roma against Serie A side, Genoa, to become the first player born in 2003 to score in a Serie A game.

Black Stars’ former Serbian coach, Milovan Rajevac, who was then monitoring the Sunyani-born youngster, immediately handed him an invitation to join his squad for the 2021 Africa Cup of Nations (AFCON) in Cameroun, despite previously rejecting an invitation for the World Cup qualifiers against Zimbabwe and South Africa.

Even though he turned down the invitation to help him focus on his development under Coach Jose Mourinho, he could not resist the invitation for the World Cup playoff under stop-gap coach, Otto Addo.

The German-born gaffer gave Afena-Gyan his international debut in Kumasi in the first leg of the play-off where he effectively complemented the effort of Jordan Ayew in attack to impress the Stars coach, though he was unable to find the target.

“Felix [Afena-Gyan] did very well, created a lot of chances, made good runs, gave his all in defensive situations. He did exactly what I wanted him to do. He is just 19, wow, what a talent he is,” Addo said after the player’s debut.

It is for this reason that AS Roma manager, Jose Mourinho, places so much value on him and has rated him so high, having emerged from the juvenile league into such a phenomenal figure. But he believes he needs more time to learn to become the star for the future.

''Until a few months ago, he was playing on the Primavera pitch. He’s a humble boy, a boy who wants to learn. From a tactical point of view he needs simple and objective things to do that.

''He did what he had to do, he created problems for Cuadrado and also did a good job defensively.
''Unfortunately, he doesn’t have enough fuel for 90 minutes and when he came off we missed things that were too simple. He has talent, he just needs concentration,'' Mourinho told DAZN in an interview.

With his imposing frame and firm control on the ball, Afena-Gyan is now likened to the Black Stars former skipper and namesake, Asamoah Gyan, who currently holds the record as the most clinical finisher in Ghana with 51 goals in 109 appearances. He is also Africa’s top scorer at the FIFA World Cup with six goals.

The same confidence was reposed in the budding goal poacher during the return leg of the playoff in Abuja and, once again, he could not register his debut goal for the country but his contribution could never be swept under the carpet, having tormented the Super Eagles rear in the entire 90 minutes he played.

In the absence of Asamoah Gyan, the onus will now rest on AS Roma forward to keep the nation’s hope alive at the FIFA World Cup as he is likely to lead the Stars’ attack.

Indeed, his rapid rise to fame seems to baffle many, having emerged straight from an amateur club in Berekum straight to the European top flight just within a year.

A student of Berekum Senior High School, Afena-Gyan was first spotted by scouts while playing in the regional inter-school sports competition where he excelled as a midfielder.

He was quickly shipped to Italy from EurAfrica FC where he went on trials with a number of teams until Roma’s junior side eventually picked him and converted him into a striker.

After impressing in a few matches in the Italian youth league, Primavera, the attacker caught the eyes of first team coach, Jose Mourinho, who invited him to start training with the senior team.

He made his senior team debut on October 27, 2021 against Cagliari, and on November 21, he came off the bench to score twice against Genoa in the Serie A which compelled Mourinho to honour his promise of buying him an €800 shoes.