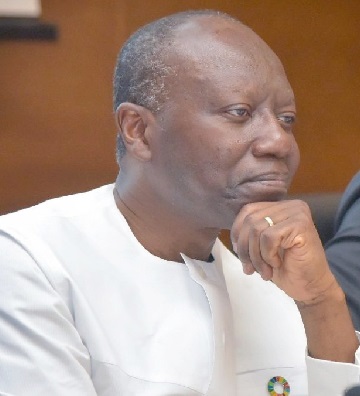 The move by the Minority in Parliament to remove the Finance Minister, Ken Ofori-Atta from office through a vote of censure was botched when the Majority walked out of the chamber minutes before voting could commence on Thursday evening.

The Majority Leader, Osei Kyei-Mensah-Bonsu said he was washing his hands off together with his colleague Members of Parliament.

This, therefore, brought the entire process to an abrupt end.

Indeed, the Minority had marshalled all their members and whipped them into line to vote for the removal of Ken Ofori-Atta from office as Finance Minister.

But despite their walking out, the Speaker, Alban Bagbin, ordered for a secret ballot in accordance with Standing Order 105 and Article 104 (4) of the 1992 constitution on the processes of removing a minister through a censure motion.

In the debate preceding the voting exercise, both sides of the divide put their best foot forward.

The Attorney-General, Godfred Yeboah Dame, who was granted permission by the Speaker, offered some legal education and challenged the locus of Parliament to deal with the matter rather than the Commission on Human Rights and Administrative Justice (CHRAJ), which was mandated to deal with issues of corruption.

Further, he questioned the procedure of the House in the censure motion.

But that was contended by the Minority Leader, Haruna Iddrisu when he alluded to the fact that serving the motion in the order paper of the House for seven sitting days, the formation of an Ad hoc committee, the debate process as well as giving the minister the opportunity to be heard could not be said to be no procedural.

Following a meeting held with leadership in conclave ahead of the debate, the Speaker gave four people from each side 10 minutes to contribute to the motion.