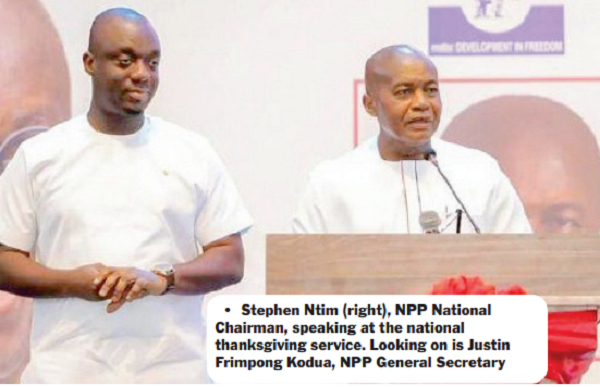 The National Chairman of the New Patriotic Party (NPP), Stephen Ntim, has urged members of the party to use the party’s 30 years to resolve internal challenges and review party structures in order to win the 2024 general election.

He said the 30th anniversary milestone should be used as a platform to build a united party.

In an address to mark the anniversary, Mr Ntim urged members of the party to use the celebrations as a means to improve the party’s relationship with its external branches, the Parliamentary Party as well as a means to rebuild and strengthen the relationship between the party and government to create a front determined to “Break the Eight”.

“After thirty years of our existence, it must be our resolve to build a proper party membership register to enhance our collective ownership of the party, a party that is united, caring and battle-ready to Break the Eight and to win the 2024 election,” he added.

He further urged members of the party to appreciate the 30 years celebrations as a serious occasion to rethink and remind themselves of the core values of the party’s tradition.

Mr Ntim stressed the need to educate young members of the party on the core values of sacrifice to seek political power and to govern the country along the ideals and philosophy of its founding fathers.

“Our tradition has already produced two Presidents for the Fourth Republic, J. A. Kufuor and Nana Addo Dankwa AkufoAddo in addition to Prof. K. A. Busia as our fi rst Prime Minister. We must be proud of this record and the record of many ministers and Heads of Government and state institutions that we can boast of,” he said.