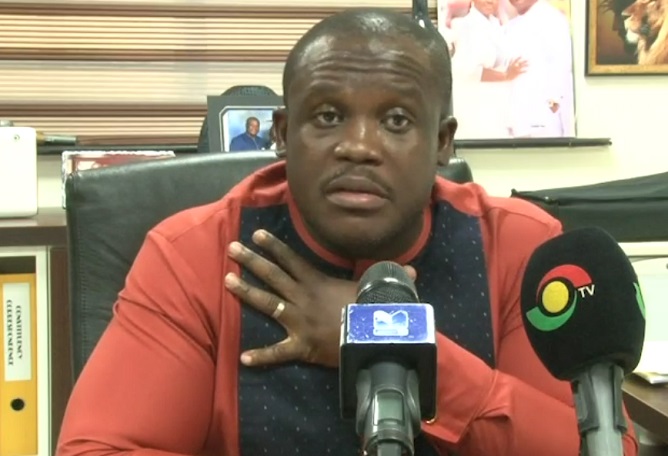 The Member of Parliament for Ningo-Prampram in the Greater Accra Region, Samuel Nartey George says the ruling by the Supreme Court on Wednesday allowing Deputy Speakers of Parliament to vote even when they preside over proceedings, could be problematic.

While he disagrees with the decision of the apex court as it interferes with the authority and independence of parliament, he says it also potentially opens a Pandora Box with ominous outcomes.

The Supreme Court declared Wednesday that a Deputy Speaker who happens to be a Member of Parliament does not lose his right to take part in decision making in Parliament, and according to the court, the approval of the 2022 budget on November 30, 2021 in which Mr. Joe Osei Owusu, the First Deputy Speaker counted himself as part of the quorum required for voting, was valid.

Graphic Online’s Ebo Hawkson who sat through the Supreme Court ruling reported that in the unanimous decision, a seven-member panel of the apex court held that upon a true and proper interpretation of Article 103 and 104 of the 1992 Constitution, a deputy speaker presiding over proceedings in Parliament has the right to vote on matters and also be counted as part of the quorum for decision making in the house.

The court also struck down order 109(3) of the standing orders of Parliament which prevents a presiding deputy speaker from voting, saying it is unconstitutional.

The court’s decision follows its dismissal of a writ by a law lecturer, Justice Abdulai, who was challenging the decision of Mr. Osei Owusu to be counted as part of the quorum to pass the budget.

But reacting to the court’s ruling, Sam George said “parliament is a master of its own affairs and that the procedure in parliament resides in the bosom of Mr. Speaker,” and that allowing anyone presiding over proceedings to take part in a vote he is superintending will amount to an illegality.

“I do not know what position my leadership will take or my party will take but my principled position is one that states that anyone presiding, be it Mr. Speaker or any of his deputies, has absolutely no business taking part in the vote on the floor of the house and we will employ every legal means within the parliamentary procedure to ensure that this long time tested practice of parliament which is 30 years old this year is upheld…”

He insisted that anyone in a conflict of interest situation cannot be allowed to vote, and wondered why the judges were silent on the standing orders of parliament that say that the chairman of a committee does not have a vote.

“The chairman of a committee in parliament does not have an original vote so why are they not saying that that is also a deprivation of his constituents?

“We pray the Lord Justices, their role is to bring clarity, not rather lead us into confusion and obfuscate what the facts are. The law is clear, we have heard them, they have passed their ruling but parliament, we are masters of our own procedure, we will carry out what we believe is right on the floor of the chamber.”

Sam George vowed to stand up to anyone or arm of government that seeks to interfere in the business of parliament, describing the Supreme Court decision as a dangerous slope as it presupposes that someone may go to court for the courts to hold an MP criminally liable for comments on the floor of the house.

“This is a Pandora Box we will not and should not open… That is why I said to you that we must be careful the door we want to open. So right now, when I carry out my business on the floor, you want to subject me, acting in lawful capacity as a member of parliament, not outside parliament (but) on the floor of the house, you want to subject my actions to the whims and caprices of the judiciary? Let’s be careful where we are going in this country, all because of an e-Levy?"