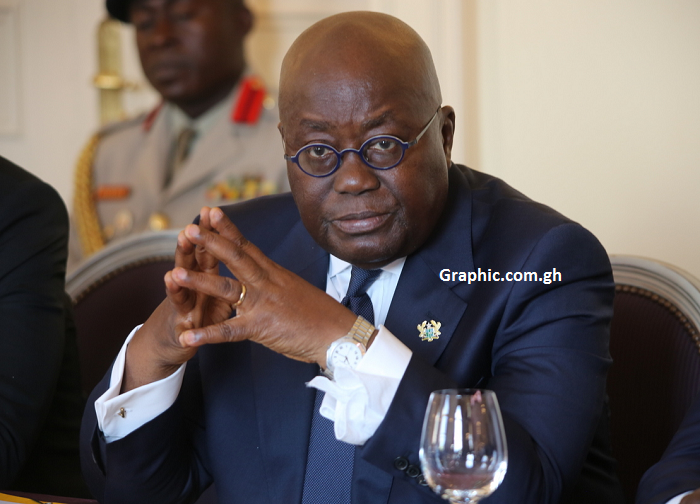 President Nana Addo Dankwa Akufo-Addo has called for the removal of the “Africa Risk Premium” from the credit rating structure for African countries seeking credit finance on the international capital market.

He was speaking at the Chatham House in London last Thursday on the theme: “Financing for Sustainable Development of Africa”.

The President cited the African Development Bank’s estimation that Africa’s infrastructure requirements amounted to between $130 billion and $170 billion a year and said “nearly half of the funds required to fill this financing gap could be found on the continent, if we can prevent, which we must, their outflow.”

“Countries that do not enjoy IDA financing have to go to the capital market for more expensive financing” where credit rating agencies and lenders added an “African Risk Premium”, which made it expensive to raise sustainable and competitive long-term capital to support transformation.
On the flip side, the President said, Africa offered the highest return on foreign direct investments in the world.

The President stated that the time had come for Africans to take the lead in generating for themselves the additional funds needed to advance, as the continent was well resourced in natural and human resources.

President Akufo-Addo said Africa must build robust institutions to protect herself, strengthen the capacity of her geological services to determine exactly what and how much resources the continent had, and establish legal departments in governments that would ensure that African countries got their due in contracts that they signed.

“In the process, we can draw on the expertise of private practitioners. We must strengthen our tax authorities to counter tax avoidance practices such as base erosion and profit shifting by multinationals”.

“In other words, we must entrench the rule of law. The plethora of unbalanced contracts, with their pernicious effects, has to cease, if we are to realise our vision of rapid socio-economic development,” he added.

President Akufo-Addo stated that while striving for increased domestic revenue mobilisation and leveraging technology to strengthen the performance of revenue institutions, “we must also be mindful how the revenues are spent and accounted for.”

The institution of transparent budget and expenditure management systems that allocated resources wisely to agreed national priorities were, therefore, of the utmost importance.

President Akufo-Addo said Africa must invest in education and emphasised the importance of exposing African youth to Technical and Vocational Education and Training (TVET) because that was where the skills needed for the modern economy could be developed.

“We have to maintain stable macroeconomic environments in the context of growing economies in order to attract private sector investment, and move away from the raw material producing and exporting economies of the past”.

“Our economies should be based on value-addition and industrial activities, i.e. on things we make and grow,” he said.

In the view of President Akufo-Addo, that was the best way African countries could take advantage of the African Continental Free Trade Area, whose Secretariat Ghana would host, saying

“it is a potential game-changer in our quest to moving Africa to a situation Beyond Aid.”