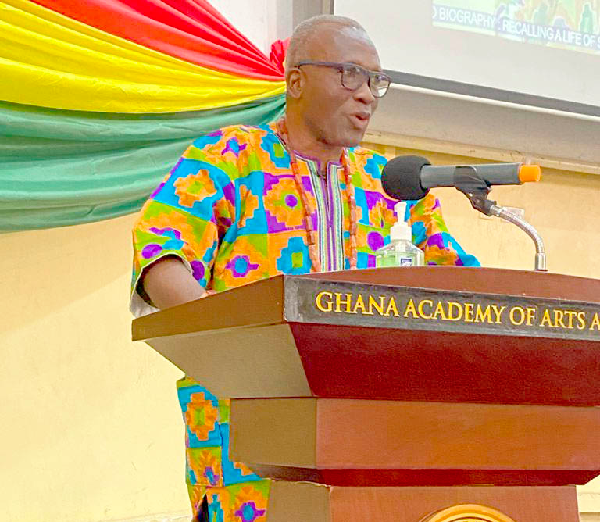 Prof Joseph Atsu Ayee speaking at the launch of his autobiography
30.5k Shares

A Professor of Political Science at the University of Ghana (UG) Legon, Professor Joseph Atsu Ayee, has called for a culture of meritocracy in public service that will put qualification above connections.

“People who believe in connection are lazy people who don’t want to work; they also lack integrity.

If you are hardworking, you can make it even if you are in a hostile environment.

I’ve worked in places where the people there were very hostile to me but because I was hard working, they accepted me,” Prof. Ayee said.

At the launch of his autobiography in Accra, he said, his story showed clearly that one did not need connection or know public figures to achieve success.

“I have achieved all these great strides without knowing anybody in power.

People must move away from this issue of knowing somebody or having connection to enable them to stand up for themselves and achieve what they want to achieve based on their abilities,” he said.

The 192-page autobiography chronicles his life history, from growing up in Keta in the Volta Region and how he was able to overcome all challenges to become a high figure in the country’s political discourse.

Prof. Ayee encouraged public figures to write their autobiographies for the younger generation to learn from their mistakes and achievements.

“I want to inspire others to write their history, some good politicians never wrote their autobiography so their history died with them.

I want to use this opportunity to inspire others to write down what they’ve done for the country.

“Putting on record what I have done for this country in terms of education, civil society work, I believe all my efforts will never be forgotten by the next generation, Prof. Ayee said.

He said the book would also encourage people to aim at reaching greater heights irrespective of their background.

A Professor of Sociology and Development Studies, Prof. Ernest Kwaku Dumor, while reviewing the book, said Prof. Ayee had shown that he was a self-fulfilled man “without a tolling of bells”.

He described the book as a powerful meditative book which took readers through an exploration of the tasks that Prof. Ayee was given from his growing up years, through his educational journey, and the challenges he faced.