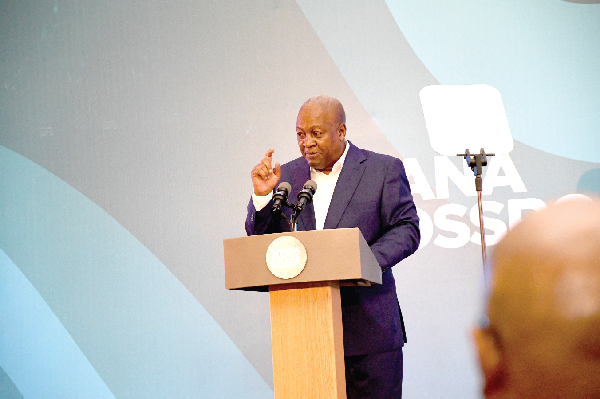 Former President John Dramani Mahama has stated that the next National Democratic Congress (NDC) will repeal the Electronic Transactions Act, describing it as a regressive tax, which imposed hardships on Ghanaians.

“A new National Democratic Congress Government, God willing and with the votes of the sovereign people of Ghana – in 2025 — will repeal the E-Levy Act,” he said.

He said although the NDC was not opposed to the principle of taxation, the NDC was, “implacably opposed to distortional and burdensome taxes such as the E-Levy that only force Ghanaians to endure more suffering”.

“Unfortunately in the face of this self-inflicted economic catastrophe, this government against all sound advice has decided to introduce the E-Levy that heaps more suffering on Ghanaians,” he said.

Mr Mahama emphasised that it was even more saddening that the levy was implemented on May Day, when workers were supposed to be celebrated.

The former President stated this in a lecture in Accra last Monday on the theme ‘Ghana at a Crossroads’ during which he also submitted 13 interventions for the government to adopt to help address the challenges confronting the country.

The public lecture was part of activities put together by the NDC for the former President to share his opinion on the state of the nation.

Among the interventions, he suggested a Cabinet reshuffle to make room for fresh ideas, a drastic reduction of the size of the government to reduce expenditure, limiting borrowing significantly and using some of the windfalls from the rising crude oil prices to revitalise the sinking fund in anticipation of future debt servicing.

He also asked the government to ensure that data provided on the economy was transparent and gave a true picture at all times of the national situation to help restore investor confidence, increasing the GNP of the country as a share of GDP and investing in agribusiness to complete the agriculture value chain in respect of marketing and processing of our agricultural products, broad-based thinking and consultation, among others.

Mr Mahama said the proposed interventions, when adopted, would help position the economy on the road to recovery, restore investor confidence, sustain our budding democracy and provide hope for the future.

“This is not the time for political posturing and display of empty pride. We are staring down the cliff of economic collapse and every day wasted winds down the clock further. Action needs to be taken now,” he said.

Touching on the state of the country's democratic dispensation, Mr Mahama observed that aside from reversing the economic challenges, there was a need to reweave the country’s social fabric, which was currently threatening national cohesion.

“The despair and disenchantment that the economic and social problems have created within our people cannot and should not be underestimated. There are many in our country today, who question the relevance and usefulness of the democratic path we chartered 30 years ago. They see too little progress or hope to convince them that democracy of the sort we are practising is worth the effort,” Mr Mahama said.

To safeguard the country’s democracy, Mr Mahama said the government must show commitment to building genuine consensus on the matters that concern Ghanaians the most and rally support around a common national cause.

“I am ready to support this national goal with patriotic zeal. The President must show leadership and take urgent steps at this crossroads to end the dangerous levels of inequality and polarisation we see in the country,” he said.

On the security front, he said the government must find and dismiss rogue elements drafted into the security agencies because they constituted a major threat to society, including robbing bullion vans at gunpoint.

He also suggested that the Attorney-General prosecuted the killers of eight innocent people who were allegedly killed during the 2020 elections, as well as the perpetrators of the Ayawaso West Wuogon violence.