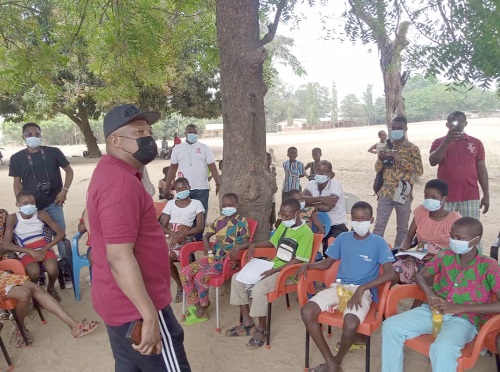 The National Democratic Congress (NDC) Member of Parliament (MP) for North Tongu, Mr Samuel Okudzeto Ablakwa, has urged MPs to take lead roles in their communities to fast-track the development of their constituencies.

According to him, the work of an MP was not and should not only be limited to law-making.

Mr Ablakwa said this in an interview with the Daily Graphic at Battor last Saturday, after undertaking a three-hour clean-up exercise at the Catholic Hospital at Battor with members of the Volta Regional Chapter of the Old Vandals Association (OVA-Volta) and students of Battor Senior High School.

Members of the OVA-Volta also presented assorted food and non-food items to the Children’s Ward of the Catholic Hospital in Battor.

The alumni of the Commonwealth Hall of the University of Ghana, who were in Battor to spend the weekend with Mr Ablakwa, a member of the association, also toured selected communities with the MP to observe the impact of social interventions he had initiated to improve lives of the people.

Mr Ablakwa told the Daily Graphic that as elected representatives of the people, MPs must not only focus on passing laws but must also get aggressively involved in solving the problems in their constituencies since that was the basis on which the people gave them their mandate.

“When you are an MP in a developing country, and in a rural community for that matter, you must take interest in the wellbeing of your people. As an MP you should also be industrious to raise resources to address the needs of the community,” he said

“Let’s face it. When we are campaigning in the various communities, the people tell you they need electricity, potable water, good schools, teaching and learning materials, hospitals, among others,” he added.

Mr Ablakwa said he would continue to prioritise the human development of his constituents in the area of health, education, skills training and also create for them an enabling environment to spur them on to lead purposeful and dignified lives.

He commended members of the OVA-Volta for selecting the North Tongu Constituency and spending the weekend with him to monitor the impact of the various interventions initiated.

The President of OVA-Volta, Mr Edem Kofi Kpotosu, commended the MP for exhibiting the rare traits of a Vandal and imbibing the values of the Commonwealth Hall in meeting the needs of others.

The Medical Superintendent of the Catholic Hospital in Battor, Dr Bernard Hayford Atubiga, received the items and thanked the MP and members of OVA-Volta for dedicating their time and resources to support the hospital, especially the Children’s Ward.