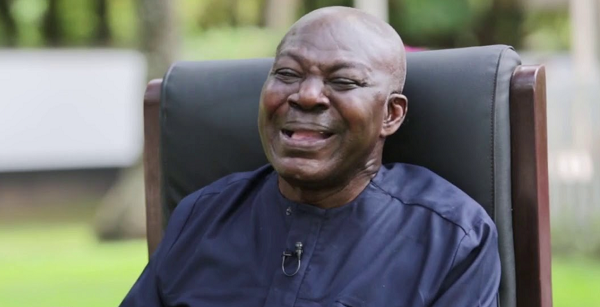 A 183-page book which chronicles the diplomatic stewardship and experiences of one of Ghana’s astute diplomats, Ambassador Daniel Kufuor Osei, specifically within the West African sub-region was launched today at his Cantonments residence in Accra.

Titled “Privileged conversations; adventures of an African diplomat”, the memoir shared some major events in the former ambassador’s foreign service career which spanned over four decades.

Launching the book via Zoom, the Minister of Foreign Affairs and Regional Integration, Ms Shirley Ayorkor Botchwey, commended Ambassador Osei for the time and effort invested in producing the book which she said provided an insightful and coherent account of some events of major diplomatic significance.

She said one of Ghana’s major foreign policy objectives was to maintain good neighbourliness and that much of the goodwill and respect the country enjoyed stemmed from the commitment of its leadership to maximise the benefits of that policy.

As a former Deputy Foreign Minister and current substantive Foreign Minister, Ms Botchwey said: “I am aware of the challenges we faced and the lessons learnt, especially in our region and across Africa, most of which had been well documented in the book.”

She added that the recent election of President Nana Addo Dankwa Akufo-Addo, as Chairman of the Authority of Heads of State and Government of ECOWAS presented yet another opportunity to build on the old foundations and effectively project Ghana's leadership for the resolution of the many challenges in the sub-region.

“The West Africa region remains a place of immense potential but constrained by pockets of instability. The security and development challenges in the Sahel, the persisting influence of Boko Haram in Nigeria and beyond, and sharp differences in views on the values of democracy and divergence of actions by the political class of some West African countries, continue to have an adverse impact on the region,” she pointed out, and said at a time when Ghana and the rest of the world were grappling with the COVID-19 pandemic, there was the need for much deeper and broader cooperation.

Ms Botchwey, therefore, gave an assurance of Ghana’s commitment to provide leadership, particularly for the situation in Mali where the removal from office of President Ibrahim Boubacar Keita by the combined actions of the military and civilian protestors, threatened the consolidation of democratic values within West Africa.

“As we have learnt from our own era of instability, coupled with the conflicts in Liberia and simmering socio-political tensions in countries such as Guinea, Guinea Bissau, Burkina Faso, Togo, Senegal, The Gambia and Sierra Leone, there is always a need for astute diplomatic leadership in negotiating peace,” Ms Botchwey stressed.

On the Ghana-Nigeria relations, the Foreign Minister said the government continued to engage actively its Nigerian counterpart on the trade related and other disputes that had created tensions in recent times.

Reviewing the book which was foreworded by former President John Agyekum Kufuor, Ambassador Kwabena Osei-Danquah described it as one which is gripping, riveting and instructive.

He said the stories were a true reflection of the author and which epitomised his traits of empathy, bonding, networks and intelligence in achieving success in diplomacy while it traced the statecraft of the leadership within the sub-region since 1976.

Ambassador Osei, who is also the President of the Council on Foreign Relations Ghana, reiterated that the book chronicled major events in his diplomatic career within the West African sub-region.

The Chairperson for the ceremony, Mrs Agnes Aggrey-Orleans, said the publication was in fulfilment of the aims and objectives of the Council on Foreign Relations Ghana which was to publish memoirs, books and articles of other professionals.