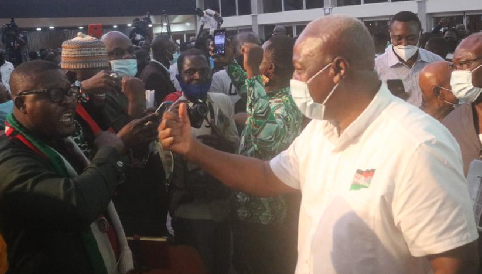 Former President Mahama interacting with some members of the NDC
30.5k Shares

The flag bearer of the opposition National Democratic Congress (NDC), former President John Dramani, has criticised the Akufo-Addo administration for managing an economy that he says only benefits a handful of people.

He said when given the mandate to lead the country once again, the NDC would implement policies that would support, grow and promote Ghanaian-owned businesses, and also ensure equitable distribution of the nation’s resources.

The former President was speaking in Kumasi yesterday during the first of a series of Town Hall meetings by the NDC meant to explain policies contained in its Election 2020 manifesto.

According to Mr Mahama, the New Patriotic Party (NPP) government’s claim that the economy was growing was a mirage as it did not have any positive impact on Ghanaian-owned businesses.

He accused the government of rather pursuing policies that were promoting foreign-owned businesses to the detriment of Ghanaian-owned ones.

Such a situation, he said, was having a negative impact on the livelihoods of many people in the country who had lost their jobs and their businesses collapsed as a result of the policies of the NPP government.

President Mahama said his government would not indulge in nepotism or promote businesses of party members and collapse those belonging to those in opposition.

He reiterated his assurance that all those whose money got locked up in the collapsed banks and financial institutions would have their money paid back to them in full.

The NDC, he said, had the blueprint to turn around what he described as the dwindling fortunes of the country by pursuing an agenda of jobs and prosperity, coupled with massive infrastructure and inclusive development.

“We will not collapse local businesses but will rather support the existing ones, and create more,” he said.

He, therefore, urged Ghanaians to vote for the NDC to come back to power to implement all the laudable and life-changing policies and programmes

Speaking on education, the Chairman of the NDC Manifesto Committee, Prof. George Oduro, said the NDC, when voted into office, would commit more resources to education to ensure maximum realisation of the country’s human resource potential.

According to him, children must be given quality and accessible education right from the basic level to give them a good foundation for the future.

He said the NDC would make quality and accessible education one of its priorities to ensure that students coming out of the country’s educational system were competitive.

Prof. Oduro said the Free SHS programme being touted by the NPP as a miracle was a constitutional requirement which the government had failed to implement properly.

The NDC, he stressed, would put in place policies that would improve the Free SHS, cancel the double-track system and also include private schools in the programme.

According to him, if private schools were included in the Free SHS programme, there would be no need for a double-track system.