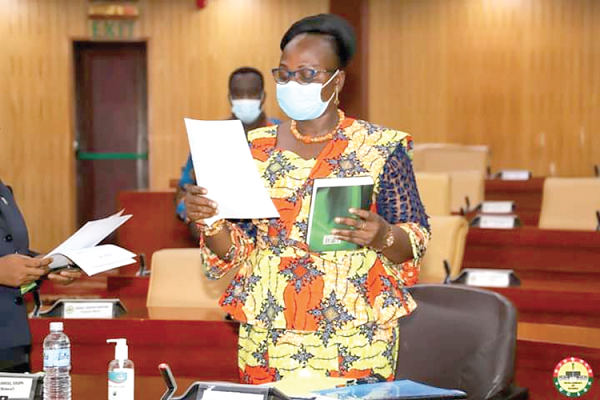 The Minister designate for Bono Region, Mrs Justina Owusu-Banahene, has expressed her commitment to work with the various development partners in the area to elevate the status of the Bono Regional Hospital into a teaching facility.

She said she would solicit the support of the Members of Parliament (MPs), the chief executives of municipal and district assemblies, as well as traditional rulers, to accomplish the vision.

That, she believed, would encourage nurses and midwives to undertake their in-service training at the hospital as well as motivate the University of Energy and Natural Resources (UENR) and the Sunyani Technical University to include medicine in their curricula and train doctors to handle special medical cases.

The nominee stated this in response to a question by a member of the committee who asked what steps she would take to bridge the development gap in the area.

She spent 54 minutes answering questions on issues pertaining to her stewardship as the immediate past chief executive for the Sunyani Municipality, the Sunyani water expansion project, smuggling of cocoa across borders, revamping the sports industry, job creation, cashew cultivation, girl-child education, sanitation, land and chieftaincy disputes.

Mrs Owusu-Banahene is a 51-year-old trained teacher who, until her appointment by the President, taught for 20 years both at the basic level and College of Education.

She recounted that in the past there were no “urinary or prostrate” medical specialists in the area.

That, she said, necessitated the need for three medical specialists from the Korle Bu Teaching Hospital to travel to Sunyani every three months to attend to the healthcare needs of the people.

“On their way back after one of their trips, we lost all the three doctors. I am of the view that if our regional hospital is a teaching hospital where we have these specialist doctors who handle special cases, some of these unforeseen issues will be reduced,” she said.

On the question of whether or not some lands in Sunyani should continue to be vested in the state or should be reverted to the appropriate stools, she offered mixed responses.

In her view, if Sunyani lands were vested ones that did not pose any problem, they should continue to remain vested in the state.
“But if it is a vested land and it is posing a problem, then authorities must sit together with the traditional council so we find a lasting solution to it,” she said.

Delving into the smuggling of cocoa beans across the borders in the area, the nominee pledged to work with the security agencies and traditional authorities to stop smuggling activities.

She, however, blamed the urge for people to smuggle cocoa to Cote d’Ivoire on the better prices farmers enjoyed outside.
“If the pricing of cocoa in Cote d’Ivoire is higher than ours, we should also sit down and see why and how to stop the smuggling,” she said.

She said Bono Region was where most agribusinesses were into cash cropping, especially in the cultivation of cashew.

With the people not able to depend on one source of income, she said many farmers were not cultivating cashew that fruited within three and four years, helping the growers earn decent income.

She, however, said unlike cocoa that had ready market and enjoyed stable prices due to the role played by Ghana Cocoa Board, cashew did not have regular buyers, dwindling the interest of the people in the crop production.
She, therefore, called for farmers to be given soft loans with minimal interests to motivate them to increase their produce and solve unemployment.