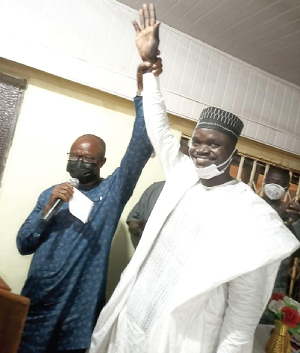 Mr Robert Yaja Dawuni ( right) being declared the MCE for Gushegu by Mr Lucas Yiryil (left), Northern Regional Director of the EC, after his confirmation by the assembly

Assembly members of the Gushegu Municipal Assembly in the Northern Region have overwhelmingly endorsed Mr Robert Yaja Dawuni as the new  Municipal Chief Executive (MCE) for the area.

Mr Dawuni until his nomination by the President for the position of MCE was the Presiding Member (PM) for the Gushegu Municipal Assembly.

In a related development, Alhaji Ahmed Yussuf Abubakar who was retained by the President for the position of MCE for Yendi, failed to secure the two-thirds majority of the votes of members of the Yendi Municipal Assembly to begin his second term.

Alhaji Abubakar had 21 of the assembly members voting in his favour while 20 voted against him out of the total of 41 at the election held in Yendi to confirm him as the MCE last Friday.

Mr Dawuni, who is a teacher by profession, had all the 35 members of the assembly voting to endorse him as the new MCE.

Out of the 16 persons nominated by the President for the positions of Metropolitan, Municipal and District Chief Executive (MMDCE) in the Northern Region, Mr Dawuni is the first, and one of the new entrants to be confirmed since the process to confirm the nominees began in the region last Friday, September 24,2021.

Mr Dawuni after his confirmation, thanked the President for nominating him to the position to serve and the assembly members for the confidence reposed in him.

The Member of Parliament (MP) for the Gushegu Constituency and Deputy Minister of Transport, Mr  Alhassan Tampuli, assured the elected MCE and the assembly members of his continuous support towards the development of the area.

With regard to Yendi, the  Northern Regional Director of the Electoral Commission (EC), Mr Lucas Yiryil, who supervised the election, said Alhaji Abubabar was able to secure only 51 per cent of the votes cast, falling short of the required two-thirds and is thus qualified for a second round of voting.

He added that the commission was expected to conduct a fresh election within 10 days for the nominee to be confirmed.

The Northern Regional Minister, Alhaji Shani Alhassan Shaibu, who was present during the exercise, appealed to the Assembly Members to bury their differences and approve the nominee to continue with the government's development agenda for the area.