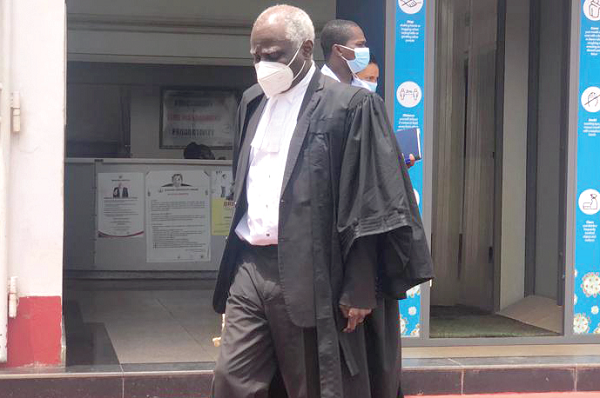 The National Democratic Congress (NDC) Member of Parliament (MP) for Assin North, James Gyakye Quayson, has filed a review application challenging the decision of the Supreme Court to hear a case seeking to stop him from holding himself as a legislator.

On March 8, this year, a seven-member panel of the court held that Mr Quayson had been duly served through substituted service with the writ and the injunction application.

Accordingly, the court adjourned the case to Wednesday (March 16, 2022) for hearing, and ordered the MP to file his statement of case, responding to the court processes by yesterday.

When the case was called, the MP was absent, but his counsel, Tsatsu Tsikata, informed the court that his client had filed a review challenging the court’s decision that the substituted service was rightly served and, therefore, the case was to be heard.

Counsel also said his client had also filed an application for stay of proceedings for the case to be put on hold until the final determination for the review.

A resident of Assin Breku, Michael Ankomah-Nimfah, who secured a judgment from the Cape Coast High Court nullifying Mr Quayson’s election on the basis that he held a Canadian citizenship, wants an injunction from the Supreme Court, restraining him from holding himself out as an MP.

The plaintiff argues that despite the judgment of the Cape Coast High Court, Mr Quayson continues to parade himself as a sitting MP.

He is also seeking an interpretation of Article 94(2) (a) of the 1992 Constitution, which bars a person owing allegiance to another country from contesting as an MP, the same constitutional provision the High Court used to nullify the MP’s election.

It came up that the review and the stay of proceedings applications were filed by the lawyers for Mr Quayson yesterday.

That led the court to wonder why counsel failed to act timeously but waited and filed the processes yesterday when the court had delivered its ruling on March 8.

Mr Tsiakata answered that he applied for the proceedings and the decision of the court last Monday, but got them last Tuesday.

The court, therefore, called the Registrar of the Court, Matthew Antiaye, who confirmed what Mr Tsikata said.

Counsel for the plaintiff, Frank Davies, submitted that the review and the stay of proceedings application should not bar the court from going ahead to hear the injunction application.

The Attorney –General (A-G), Godfred Yeboah Dame, who is also a defendant in the case, sided with Mr Davies and urged the court to hear the injunction application.

In spite of its reservations about the timing of the applications, the court decided to adjourn the case to March 29 when the review application would be heard.

This was refuted by Justice Dotse, who insisted that he said the injunction application could be heard depending on the outcome of the review.