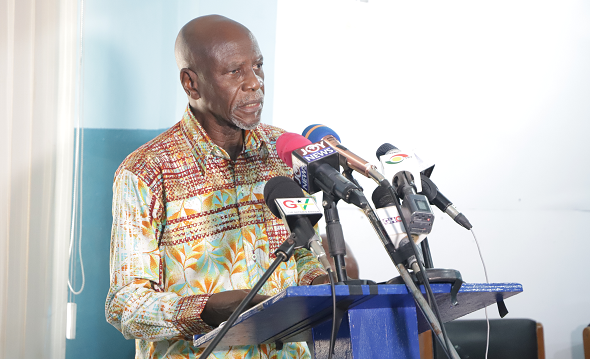 Mr Akoto Ampaw, a member of the concerned Ghanaian citizens

The Concerned Citizens against the Promotion of Proper Human Sexual Rights and Ghanaian Family Values Bill, 2021, have called on Parliament to reject the bill as it is unconstitutional and has no place in a secular democratic state.

According to the group, there was no justification for the anti-Lesbian, Gay, Bisexual, Transgender, Intersex LGBTQI+ bill to be passed into law.

"Indeed, it is neither necessary to protect any legitimate public interest nor does it promote the constitutional rights of Ghanaians.

"Moreover, it is not reasonable or proportionate to the (non-existent) mischief it (purportedly) seeks to cure and does nothing to promote so-called 'proper' family values," it said, adding that the bill was incurably defective,
"thus we accordingly call upon Parliament to reject it in total".
The Group of 18 concerned citizens and its associates said this at a press conference in Accra yesterday.

The associates are the Human Rights Advocacy Centre, Amnesty International, LGBT Rights and the Africa Centre for International Law and Accountability.

Presenting the first part of their press statement, a member of the group, Mr Akoto Ampaw said the public debate clouded the issues and diverted attention from the serious Constitutional, legal and public interest issues raised by the introduction of the Bill in Parliament.

“The insults, curses and threats also confirmed our view that the bill, by its contents, was stoking a crusade of cultural fanaticism, social intolerance, bigotry and hatred that should be condemned by all well-meaning Ghanaians.

He said the groups opposed to the bill were not advocates for same-sex marriage.

“We wish to clearly state that despite the misinformation in the public domain, neither our group nor anyone we know has introduced any bill in Parliament to legalise same-sex marriage.

On her part, the Executive Director of the Human Rights Advocacy Centre, Ms Selasi Tsegah, said a common chorus that had greeted any critique of the provisions of the bill was that most Ghanaians were opposed to LGBTQI+ practices.

“This view point unfortunately involves a misconception of democracy. While the majority generally prevails in a democracy, a fundamental and important principle of democracy is the protection of minority groups from the dictatorship of the majority,” she said.