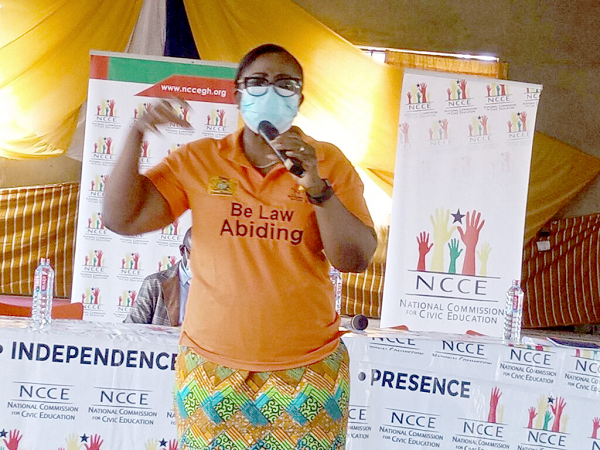 “In order to achieve National peace, we must learn to coexist irrespective of our cultural backgrounds and languages so as not to bring about any misunderstanding, which could degenerate into conflicts,” Mrs Annan stated at a workshop organised by the Tema Metropolitan NCCE Directorate.

The workshop was on the theme, “Empowering Ghanaians to stand for National cohesion and inclusive participation” Mrs Annan noted that the laws of the land did not allow the formation of any vigilante group.

Mrs Annan said it was the mandate of the Commission to work towards the promotion and sustenance of the country’s democracy while inculcating in the Ghanaian citizenry the awareness of their rights and obligations, through civic education.

She gave the assurance that the Commission would continue to create and sustain within the society the awareness of the principles and objectives of the 1992 Constitution as the fundamental law of the people of Ghana.

She noted that the public education embarked upon by the Commission in collaboration with the National Security also reinforced its commitment to educate and encourage the public to defend the Constitution at all times, against all forms of abuse and violation.

Mrs Annan said the NCCE’s activities largely targeted the youth and citizens in districts in the Oti, Volta, parts of Bono East and Eastern regions, coastal districts of Greater Accra, Central, Western regions, and the border districts of Western North, Ahafo and Bono regions, as well as other hotspot communities and districts across the country.

According to her, the programme broadly sought to promote national cohesion, peaceful co-existence, and countering extremist activities especially in the parts of the country where peace and security were under threat.

Mrs Annan also advocated the use of the Alternative Dispute Resolution (ADR) system to settle issues, a system she noted brings more cohesion into the society, especially in non-criminal cases.

“As part of its mandate to educate the general public on important national issues and to create awareness on the rights and responsibilities of the Ghanaian citizenry, the NCCE with support from the Ministry of National Security has embarked on a series of community education and sensitisation activities,” she said.
She reminded political parties against forming vigilante groups as it has been banned