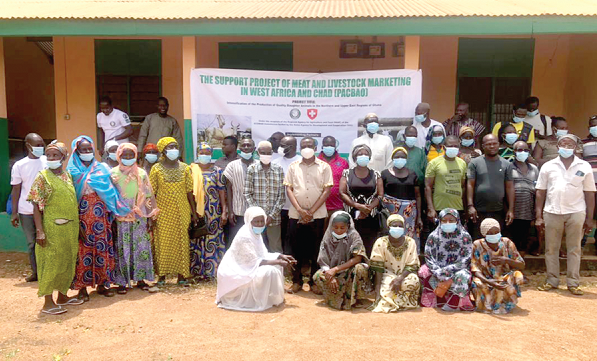 A project aimed at boosting the production of quality livestock and the creation of markets for the supply of animals with high meat potential has been inaugurated in Bawku in the Upper East Region.

The two-year US$200,000 project is under the auspices of the Regional Agency for Agriculture and Food (RAAF) of the Economic Community of West African States (ECOWAS) Commission and funded by the Swiss Agency for Development and Cooperation (SDC).

It also seeks to build the capacities of farmers in the livestock value chain to access quality animal feed at a lower cost and will be implemented by a consortium of four organisations and institutions in two municipalities. The beneficiary municipalities are Bawku in the Upper East Region and Gushegu in the Northern Region.

The implementing organisations are the Ghana Developing Communities Association (GDCA), the lead implementer; the Department of Animal Science of the University for Development Studies (UDS), the Pong-Tamale Livestock Breeding Station and the Livestock Dealers Association of Bawku.

The initiative, which is under the support project for meat and livestock marketing in West Africa and Chad (PACBAO), is dubbed “Intensification of quality slaughter animals in the Northern and Upper East regions of Ghana.”

At the inaugural ceremony in Bawku, the Executive Director, GDCA, Alhaji Osman Abdel-Rahman, noted that the project sought to empower farmers in the livestock value chain in production, breeding and fattening as well as preparation of quality livestock feed.

That, he said, would ensure that the animals and meat produced were supplied to the market to improve on public health as well as increase market demand and jobs for farmers.

“Secondly, we are looking at how we can support breeders with breeding stocks so that they can improve the stocks that they are holding and support farmers who are into the production and sale of fodder,” he said.

He explained that the potential of the livestock industry had over the years been neglected by stakeholders and noted that when keen attention was paid to the sector it could create decent jobs, reduce poverty and contribute to the attainment of the Sustainable Development Goals.

The PACBAO Project Coordinator, Mr Lukeman Yussif, said ECOWAS was making a paradigm shift from being an ECOWAS of states to ECOWAS of people to ensure that the impact of policy interventions was felt directly by the people.

He stated that the two municipalities had comparative advantage in the production and sale of livestock.

He further explained that the project would develop the skills and knowledge of farmers in the livestock value chain to increase livestock production, breeding and feed production.

Mr Yussif indicated that the project would collaborate effectively with the Ministry of Food and Agriculture and the Veterinary Services Department to ensure that animal health was guaranteed and they were free from diseases such as anthrax.

He said apart from the capacity building services to support farmers to turn farm residuals into quality forage to feed the animals and preserve water resources, the project would directly support 143 breeders with cattle and sheep.