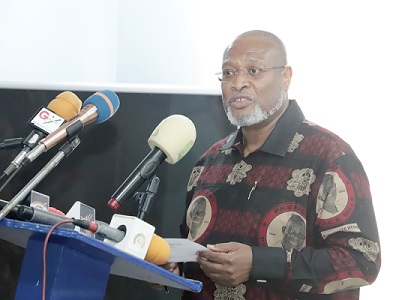 The John Evans Atta Mills Memorial Heritage (JEAMMH) yesterday[July 19, 2022] announced activities to commemorate the 10th anniversary of the demise of the late President on July 24, 2012.

Aside from a statement to be made on the floor of Parliament on Thursday, July 21, 2022, there will be a courtesy call on the National Chief Imam, Dr Osman Nuhu Sharubutu; Muslim prayers on July 22, 2022, and a hockey tournament on July 23, 2022.

At a press conference held at the International Press Centre in Accra, the Chairman of the JEAMMH, Alex Segbefia, who is also a member of the National Executive Committee of the National Democratic Congress (NDC), said a wreath-laying ceremony and memorial service would be held at 1 p.m. on Sunday, July 24, 2022, at the Asomdwee Park near the Black Star Square in Accra.

Mr Segbefia, who is also the NDC's Director of International Relations, explained that the wreath-laying ceremony was being organised by the NDC while the ruling government was also organising another separate event.

He indicated that the activities would be climaxed with an anniversary commemorative lecture on July 26, 2022 at the Accra International Conference Centre.

The lecture to be delivered by legal luminary Tsatsu Tsikata will be chaired by the Omanhene of the Juaben Traditional Area, Nana Otuo Siriboe II, who is also the Chairman of the Council of State.

“We are grateful to Ghanaians for heavily patronising the first two regional lectures in Tamale and Cape Coast respectively. We are equally expecting full participation in the remaining three regional lectures,” Mr Segbefia added.

Touching on the late President's legacies, Mr Segbefia stated that Prof. J.E.A.Mills left behind a legacy of devotion to the development of the youth through sports, as well as a commitment to education and the pursuit of excellence among others.