1st, 2nd Deputy speakers of parliament: Who are they? 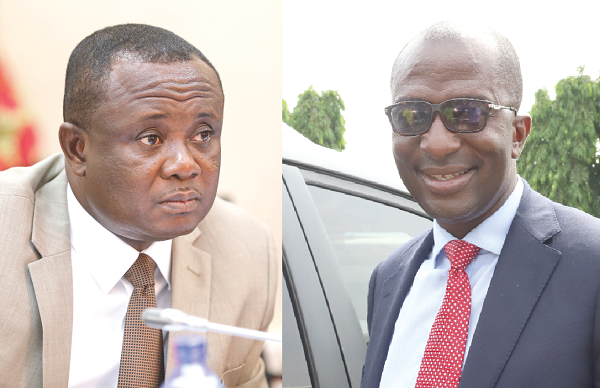 The Eighth Parliament of the Fourth Republic was officially ushered in with the inauguration of 275 Members of Parliament (MPs).

It also came with the election of a Speaker and two Deputy Speakers.

In the absence of the Speaker, either of the Deputy Speakers may take the chair when requested to do so by the Speaker during a sitting of the House without any formal communication to the House.

Article 96 of the 1992 Constitution, among others, provides that at the commencement of every Parliament, or as may be necessary, the House shall elect two Deputy Speakers who shall be known as the First and Second Deputy Speakers.

Whenever the House is informed by the Clerk-at-the-Table of the unavoidable absence of the Speaker, the First Deputy Speaker shall perform the duties and exercise the authority of the Speaker in relation to all proceedings of the house until the Speaker resumes the chair, without any further communication to the House.

We bring you the profile of the two Deputy Speakers.

The First Deputy Speaker of the Eighth Parliament, Mr Joseph Osei-Owusu, who is also the MP for Bekwai, was born at Bekwai in the Ashanti Region in 1962.

He had his basic education at the St John’s Catholic School and went to the Juabeng and Wenchi Secondary schools for his General Certificate of Education Ordinary Level and Advanced Level certificates respectively.

After his second cycle education, he proceeded to the University of Ghana, Legon, where he obtained a combined degree in Law and Classics in 1970 and continued to the Ghana School of Law, after which he was called to the Ghana Bar in 1990.

Mr Osei-Owusu, who was also the Chairman of the Appointments Committee of the Seventh Parliament, started his legal career with Yaw Barima and Co. in Koforidua and worked there for four years after which he moved to Kumasi and teamed up with Kwame Osei Prempeh to start Adom Chambers where he engaged in private legal practice for nine years.

He then ventured into public service and served as the Chief Executive Officer (CEO) of the Driver, Vehicle and Licensing Authority (DVLA) for six-and-half years.

Mr Osei-Owusu, who is also known as Joe-Wise, again went back to school at the Ghana Institute of Management and Public Administration (GIMPA) and obtained his Executive Master’s degree in Governance and Leadership in 2007.

Prior to joining DVLA, Mr Osei-Owusu held other leadership positions including the Secretary of the Ghana Bar Association (GBA), Ashanti Region, Assembly Member at Bekwai, SRC President of the Ghana School of Law and JCR President of Commonwealth Hall at the University of Ghana, Legon.

Mr Osei-Owusu resigned his position as CEO of the DVLA to contest the Bekwai parliamentary seat in 2008 as an Independent candidate and entered Parliament as an Independent MP in 2009. He was re-elected to represent the people of Bekwai from 2013 and has been in Parliament since then.

The First Deputy Speaker of Parliament has served on committees of Parliament such as the Appointments Committee, the Rail and Transport Committee and the Constitutional, Legal and Parliamentary Affairs Committee, of which he was the Ranking Member.

From January 7, 2017, he was unanimously elected as the First Deputy Speaker of the Seventh Parliament of Ghana. He is the leader of Ghana’s delegation to the Pan African Parliament.

The Independent MP for Fomena in the Ashanti Region, Mr Andrew Asiamah Amoako, 54, is a lawyer and surveyor.

In the Seventh Parliament, he was the New Patriotic Party (NPP) MP for Fomena.

He was, however, sacked from the party after he filed to contest the Fomena parliamentary seat as an Independent candidate during the 2020 election.

A statement issued by the General Secretary of the NPP said that by contesting as an Independent candidate, Mr Amoako had forfeited his membership of the party per Article 3(9) of the party’s constitution.

“For the avoidance of doubt, Article 97(1)(g) of the Constitution states that: A member of Parliament shall vacate his seat in Parliament if he leaves the party of which he was a member at the time of his election to Parliament to join another party or seeks to remain in Parliament as an independent member,” it said.

After the election, the party extended an olive branch to Mr Asiamah and he accepted to be part of it again.

He has a Master’s in Conflict, Peace and Security which he obtained from the Kofi Annan International Peacekeeping Centre at Teshie in Accra.

He has a Bachelor of Laws (LLB) and is a graduate from the Ghana School of Law after which he was called to the Ghana Bar Association (GBA). He is also a member of the Ghana Institute of Surveyors.

He worked at the Kumasi Metropolitan Assembly (KMA) as a valuer and as a legal practitioner with Akosombo Chambers.

During the 2020 parliamentary election on December 7, 2020, Mr Asiamah polled 12,805 votes as against 10,798 for Mr Philip Ofori-Asante, the NPP candidate and 2,608 votes for Ms Christina Ama Ranson, the National Democratic Congress (NDC) candidate.