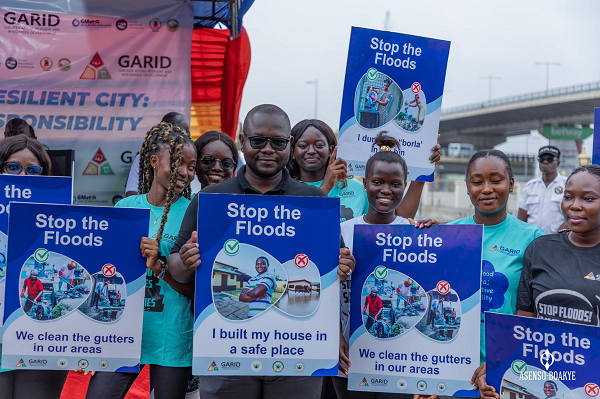 The government has launched the Greater Accra Resilient and Integrated Development (GARID) Project, a social behaviourial change communications campaign, to address flooding in the Odaw Basin.

It is also intended to improve drainage and solid waste management and provide services and infrastructure in priority flood-prone informal settlements within the basin.

With partnership from the Greater Accra Regional Coordinating Council, the project will focus on ensuring proper liquid and solid waste management, as well as climate resilient measures, in the national capital.

It is being implemented in 17 metropolitan and municipal assemblies in Accra by the ministries of Works and Housing, Sanitation and Water Resources and Local Government, Decentralisation and Rural Development, with support from the Project Coordinating Unit.

Launching the initiative in Accra yesterday, the Minister of Works and Housing, Francis Asenso-Boakye, admonished Ghanaians to change their attitude to waste disposal to enhance the flow of storm water.

With the major rainy season setting in, he said, residents of Accra and other cities especially must stop the dumping of refuse into drainage channels to complement the government’s interventions against the perennial flooding.

The minister stated that for the country to find a lasting solution to the menace of flooding, the government’s efforts must be complemented by appropriate waste disposal behaviours on the part of people, as well as the commitment of various metropolitan, municipal and district assemblies (MMDAs) to enforce sanitation laws and strictly apply the necessary punitive measures, without fear or favour.

He recounted the huge investments made by the Akufo-Addo administration under the National Flood Control and Priority Drainage Programme, with financial commitment amounting to GH¢450 million over the last four years.

“These interventions, namely: the construction, excavation, rechannelling and maintenance of storm drains, have resulted in the reduction of perennial devastating floods across the country in recent years,” he said.

The minister, however, observed that the huge investments made by government were being undermined by inappropriate behaviour among residents of some communities in Accra, particularly those along the Odaw channel, who are engaged in building on water courses and indiscriminate dumping of solid waste which found its way into drains.

“The implementation of the GARID project and all other government flood mitigation measures will not succeed if the inappropriate behaviour and underlying attitudes of people do not change,” he said.

As part of efforts to mitigate flooding during the rainy season, the Odaw is dredged regularly and funds are secured for it.

Dredge Masters Limited (DML), a leading dredging, civil and marine construction company in West Africa, has, since 2016, been proactively planning and executing various dredging campaigns of the Odaw River and the Korle Lagoon under the Accra Sanitary Sewer Stormwater Drainage Alleviation Project (A3SDAP).

The project has been largely successful, as incidents of flooding and related casualties have reduced over the past four years.

However, it has been fraught with some challenges, including encroachment along the banks of the Korle Lagoon and the disposal of waste into the lagoon by encroachers.

Despite the challenges, Mr Asenso-Boakye disclosed that the government would commence a performance-based dredging of the Odaw Basin and its tributaries in June this year as part of continued efforts to address flooding challenges in Accra.

The Minister of Sanitation and Water Resources, Cecilia Abena Dapaah, said as part of its component in the GARID project, the ministry would build a new landfill site at Ayidan, one transfer station, centres for buy-back for products such as plastics and the capping of the old dumpsite at Ablor Adjei.

Additionally, the ministry had a component in solid waste collection in communities along the Odaw channel, she said.

On the President’s vision of making Accra the cleanest city in Africa, Ms Dapaah opined that there had been a marked improvement in the handling of solid and liquid waste in the capital.

“We had 33 per cent of homes with their own household toilets, but now we have over 59 per cent, which means from last year to this, there has been an increment of 26 per cent,” she said.

Ms Dapaah said as a result of sensitisation and people observing good sanitation practices since 2017, there had not been any outbreak of cholera and dysentery.

With regard to water, she said due to massive investment by the government, access to basic drinking water in Ghana was now 87.7 per cent for urban areas and 74.4 per cent for rural areas.

“With basic access to water, it is 96.4 per cent. We hope to achieve the 2030 SDG Goal Six, which is the provision of good water and sanitation,” she said.

The GARID Project Coordinator, Dr Ohene Sarfo, said the project was born out of the occurrence of the 2015 floods that devastated lives and properties within the Greater Accra Metropolitan Area (GAMA).

Following those floods, he said, the government engaged development partners to determine the scale of damage and the resilience of the GAMA, as well as develop and prepare projects to relieve the city of the perennial floods it suffered.

“Subsequently, GARID was born in 2019 following approval from the board of the World Bank. With $200 million funding from the World Bank and after Cabinet approval, the project became active in February 2020,” he said, noting that the project had reduced the incidence of flooding along the Odaw River and its tributaries.