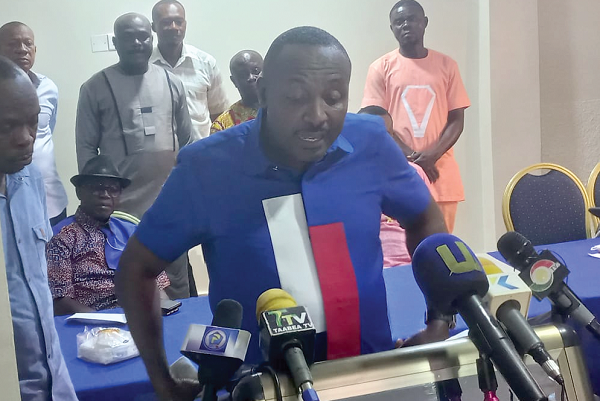 The New Patriotic Party (NPP) will conduct its constituency elections between April 28 and May 2.

The elections were initially scheduled for April 22-24, this year but the National Executive Committee reviewed the dates at its meeting last Tuesday, following the challenges that faced the polling stations and electoral area coordinators’ elections.

The General Secretary of the NPP, John Boadu, who made this known at a press conference in Kumasi yesterday, said the party would open nominations for candidates interested in contesting for the various constituency positions from April 19 to 20, 2022.

He said vetting of the aspirants would also take place between April 21 and April 22.

He said April 23 and 24 would, however, be set aside to address any appeal cases that may arise from the vetting process.

The NPP General Secretary appealed to members of the party who had resorted to the law courts to seek redress for their grievances to avail themselves of the alternative dispute resolution committee of the party rather than the law courts.

Mr Boadu, however, emphasised that the party will not condone criminalities that could tarnish the image of the party.

“Matters of criminal nature, especially actions deliberately and maliciously aimed at destroying party property and thereby damaging the reputation of the party, will not be condoned.

“In all such cases, where proven, party disciplinary measures as well as the law, will be applied,” he said.

Members of the party who are eligible to contest any of the positions available could as well visit the party’s website (www.newpatrioticparty.org) to download a nomination form and submit it before the closing date to enable them contest in the election or physically pick up the forms at the party office.

According to him, the application fee would be paid at the time of the submission of the forms.

He said those vying for chairmanship positions would pay GH¢500, and GH¢200 for any other position.

He said all the elections would be supervised by the Electoral Commission.

That, he explained, fell under the ambit of Section 17 (2) of Act 574 which stipulates that “the election of the national, regional and constituency executive officers of every political party shall be conducted under the supervision of the (Electoral) Commission.”

Meanwhile, Mr Boadu said the National Executive Committee (NEC) of the NPP had commuted the indefinite suspension of the Central Regional First Vice Chairman of the party to a definite suspension to run till the end of his term in office.

The Central Regional First Vice Chairman of the NPP, Horace Ekow Ewusie, was suspended indefinitely in 2019 over some alleged involvement in some missing excavators when he was a member of the Operation Vanguard and his subsequent refusal to avail himself to the regional disciplinary committee.

About two months ago, Mr Ewusie appealed to the NEC for the review of the suspension.

The definite suspension followed the recommendation of the disciplinary committee of the party at its meeting on Tuesday, April 12, 2022.

Mr Boadu said the NEC upheld the decision of the disciplinary committee to commute the indefinite suspension to a definite one.

Consequently, he said the suspension would be lifted after his term of office expires later this year.