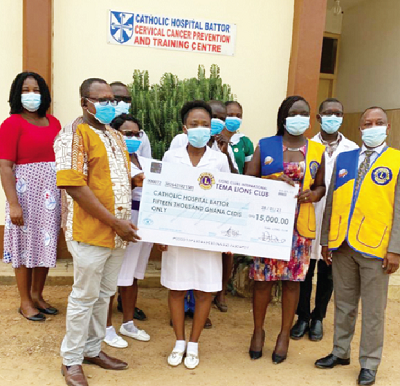 • Widad Domey (second right), President of the Tema Lions Club supported by her Vice-President, Roderick Ocloo, presents the cheque to Dr Hayford Atuguba (left), the Medical Superintendent of the Catholic Hospital, Battor, while other staff of the hospital look on
30.5k Shares

The Tema Lions Club has presented a cheque for GH¢15,000 to the Catholic Hospital at Battor as the first instalment payment for a project that will help train selected health workers to offer cervical cancer prevention services.

The project, which will cost $135,172, will see some 140 health workers (midwives and nurses) from over 70 health institutions across Ghana receive training to provide services in cervical cancer health delivery.

The project is also to help curb the menace the disease is causing among vulnerable females in Ghana.

After the initial training for the 140 people, who can only screen and detect, 56 out of them would be selected to receive higher training and be equipped with thermal coagulators to treat precancerous lesions of the cervix to prevent cervical cancer.

The partnership between the Tema Lions Club and the Cervical Cancer Prevention and Training Centre (CCPTC) of the Battor Catholic Hospital, which began in October 2019, has already trained 22 health workers from 11 institutions.

Other scheduled training programmes for last year were put on hold because of the outbreak of the COVID-19 pandemic, but it is set to resume in February 2021.

Presenting the cheque to the management of the hospital at the CCPTC, the President of the Tema Lions Club, Lion Widad Domey, said despite the devastating effects of cervical cancer on females, it had not received the same attention as other cancers had in the health delivery discourse in the country.

The gesture was thus to raise awareness of the issue and also help equip health workers with the requisite training to provide the service as “like other cancers, when it is detected early it can be treated and save particularly the vulnerable who often do not even know about the disease until its late stages.”

Accompanied by her second vice president, Lion Roderick Ocloo, the Tema Lions president gave an assurance that the organisation was committed to seeing the project through and promised that it would put in the effort to raise and present the funds needed to ensure that the selected health workers received the training on time.

Lion Domey expressed the hope that more organisations and corporate bodies would buy into the idea and lend support so as to help train more nurses and midwives to help deliver the basic health needs for females who play important roles in the socio-economic development of the country.

Receiving the cheque on behalf of the CCPTC, the Medical Superintendent of the hospital, Dr Hayford Atuguba, expressed appreciation for the gesture, describing it as “significant support in the effort to deal with cervical cancer in the country.”

The Head of the CCPTC, Dr Kofi Effah, said given that cervical cancer could be treated when detected early, it was important to train as many health workers as possible to provide the initial basic service to help save lives.

He said the objective of the CCPTC was to train as many nurses and midwives as possible so that “just as the basic health needs of women are accessible, cervical cancer screening will be widely and easily accessible all over the country.”

Dr Effah stated that the Department of Surgery in the hospital was also working with the CCPTC to train health workers who would come for the training to be able to also screen for breast cancer.

He indicated that breast cancer and cervical cancer were the top two causes of cancer deaths in women in Ghana and offering screening for those in communities across Ghana would significantly reduce deaths.

Also present at the presentation were the hospital administrator, Mr Donatus Adaletey, and the accountant, Ms Pearl Bedzo.

Lions club International has been involved in many projects in Ghana

In health, it has provided support in the areas of vision and eyesight, diabetes, childhood cancer and hunger.

The Tema Lions Club built and equipped the Eye Centre at the Tema General Hospital.