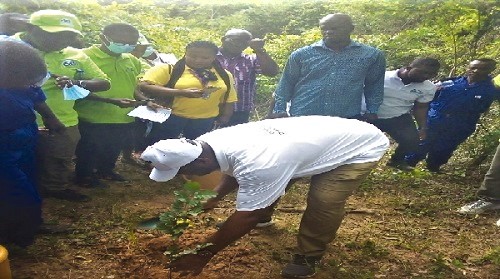 The Volta River Authority (VRA) has embarked on a tree planting exercise at the Sapawsu Forest Reserve at Akosombo in the Asuogyaman District, as a reforestation exercise to some parts that have been degraded.

The VRA’s programme was on the theme, “VRA: Promoting Sustainable Development towards a Greener Ghana” and coincided with this year’s National Tree Planting exercise.

Speaking on behalf of the Chief Executive Officer of the VRA, Emmanuel Antwi-Darkwa, the Deputy Chief Executive Officer in charge of Services, Ken Arthur, said the authority would continue to light up the perpetual flame for more interventions that would ensure safety and make VRA and Ghana, shining examples of keeping the environmental sustainability agenda going.

He said the VRA would continue with the tree planting exercise to reinforce the authority’s commitment to afforestation and reforestation, by supporting the government’s annual Green Ghana initiative.

He added that the Sapawsu Forest Reserve near the Dodi World at Akosombo was considered unique in view of its natural stand of Talbotiella Gentii, an extinct plant which is only found in Ghana.

He said the authority was of the view that reforestation of the forest reserve would not only be preserving a globally significant biodiversity area but could also help in improving eco-tourism in the Akosombo township.

He stated that as part of the government’s five million tree planting exercise last year, the authority single-handedly planted 600 trees to support the initiative and that the trees were growing very well due to the importance the authority attached to the exercise.

“Your massive attendance as workers of the VRA at this year’s event is indicative that we acknowledge the issue of our depleting forest vegetation due to factors such as forest fires, developmental projects, conversion of forest areas into arable land for cultivation, among others, is a growing cause of concern for every Ghanaian citizen who has our country at heart,” he stated.

Mr Antwi-Darkwa said it was heartwarming to witness how tree planting had evolved into an established national agenda with all the workers of the authority joining hands to champion afforestation and safeguard the environment.

He said the authority had attached so much importance to the government’s Greening Ghana initiative that it had provided enough seedlings to the Forestry Commission at Somanya to support the programme.