UTAG calls off strike to engage with gov't till March 4 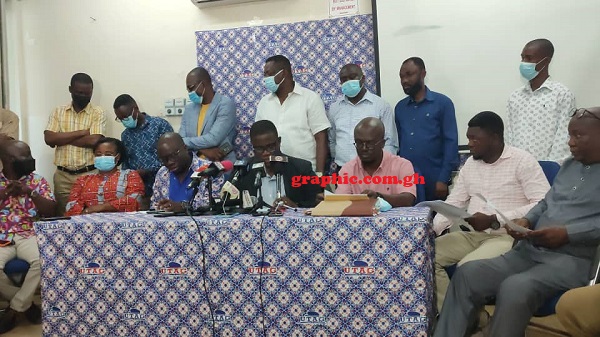 Addressing a press briefing Tuesday, the President of UTAG, Professor Solomon Nunoo said the National Executive Committee (NEC) of UTAG at an Emergency Meeting on February 21, 2022, resolved to heed the pleas and suspended the strike till March 4, 2022, to enable it to engage with the government over the poor conditions of services of university teachers.

He, however, stressed that UTAG will not hesitate to resume the suspended strike action should the government renege its commitments at the end of the stipulated period of negotiations.

"At the end of the meeting, the NEC of UTAG resolved to heed to the pleas of the eminent leaders, the Parliamentary Select Committee on Education, and other stakeholders to temporarily suspend the strike action up to Fourth March 2022, to engage with the Employer," Prof Nunoo said.

Urging UTAG members to "rally behind leadership and remain calm and resolute", Prof Nunooo said he was hopeful that with the involvement of the Parliamentary Select Committee and other eminent persons including former President John Agyekum Kufuor, Sir Sam Jonah and the National Security Minister, Albert Kan-Dapaah, the government will carry through its promises this time around.

"We know that Government has not fulfilled its part of the bargain in many signed agreements in the recent past. However, with the involvement of the Parliamentary Select Committee on Education and other eminent persons, we expect that Government will carry through its promises this time round.

"We, therefore, call on the Government to take advantage of this window to help improve the salary and general working conditions of the University Teacher. Lastly, we call on Government to see to the implementation of the several agreements that have been signed in recent times".

He further disclosed that members of UTAG at its 15 member universities were yet to vote on the decision to suspend the strike, adding that the outcome would be made known to the press as soon as the process was completed.

Responding to a question about whether UTAG members would work extra hours to make up for lost contact hours and help restore the academic calendar, Prof Nunoo said that decision could only be made by the management of universities.

"Only the management of universities; the Vice-Chancellor, the Academic Board and the University Council can make decisions about contact hours," he explained.

Prof Nunoo also stated that negotiating with the government would not affect its ongoing court case challenging an injunction placed on the strike by the High Court.

He said the ongoing court case pertaining to the strike action would be pursued to a logical conclusion.

"These are two different issues, one is to negotiate and the other is about the legality of our strike. On our part, we will continue fighting the case in court because we believe it's the right thing to do and we need to bring finality to these things because we believe it is something labour must get done and we are getting it done".