Use facts to take decisions on GMOs not emotions - Prof. Adu-Dapaah 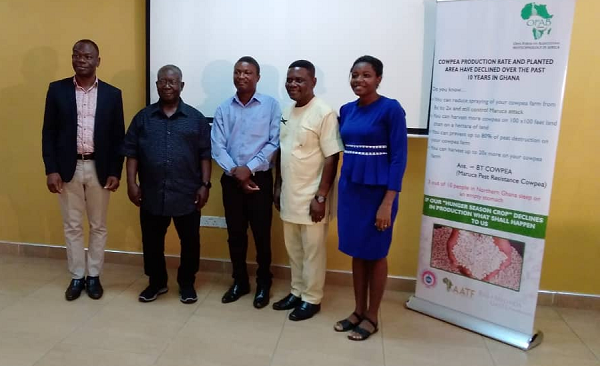 The Chairman of the Agric Chapter of the Ghana Academy of Arts and Sciences (GAAS), Professor Hans Adu-Dapaah, has urged government’s regulatory bodies to rely on available scientific data to take decisions on Genetically Modified Organisms (GMOs) in Ghana.

He said the GM technology is highly guided by scientific principles and therefore did not pose any threat to human and animal lives.

Prof. Adu-Dapaah made the remarks at a stakeholder engagement on Genetically Modified (GM) technology with some members and staff of the GAAS in Accra recently. The meeting was organised by the Open Forum Agricultural Biotechnology (OFAB), an initiative to enhance knowledge-sharing and awareness creation of agricultural biotechnology.

The purpose of the workshop was to bring clarity on GM technology activities in Ghana and the status of work done on a GM product—Pod Borer Resistant (PBR) cowpea within CSIR in Ghana.

Prof. Adu-Dapaah was hopeful that when people understand the science behind GM, they will discard the hatred developed for the technology over the years, adding that in places where the technology had been accepted now also faced similar challenges in their initial stages.

Speaking about the status GM cowpea which is being developed by Ghanaian scientists, Dr Jerry Nboyine, a seed breeder with the CSIR-Savanna Agriculture Research Institute, said the Ghanaian GM cowpea is engineered to be resistant to Maruca pest, which is the most destructive pest to the crop.

He explained that cowpea production in Ghana has been reducing by an average of 2.55 per cent from 2011 to 2016, pointing out that cowpea farm crop loss as a result of damage by Maruca pest is difficult to control with pesticides.

For him, Maruca is able to destroy the cowpea crop at every stage of its development and destruction rate is about 80 per cent.
Dr Nboyine said the PBR Cowpea under high Maruca pest pressure still increases yield 20 times more just by preventing Maruca damage.

He said while chemical control is important, the GM technology offered a better way to control the Maruca pest, saying “this technology allows for the introduction of a Bt-resistant gene into a farmer preferred local variety of cowpea.”

For him, research has shown that the Bt gene that resists the Maruca pest is safe for humans, livestock and the environment.

“The gene from the Bt produces a protein in the new plant pod borer resistant cowpea (PBR) that allows it to disrupt the digestive system of the insect pest causing it to die,” Dr Nboyine noted.

He explained that the PBR cowpea is a food security crop and therefore would be integral in meeting some of the 17 United Nations Sustainable Development Goals (SDGs).

He expressed the worry that even though in Ghana, cowpea is an important cash and food security crop, its production is seriously constrained by pests, diseases and impacts of climate stress, particularly in the field.

“A typical pest of a great nuisance to cowpea farmers is the Pob Borer (Maruca Vitrata). In a typical season, this insect can cause a yield loss of 80 per cent, thereby rendering many smallholder farmers poor and destitute,” Dr Nboyine observed.

He expressed the concern that many farmers in their attempt to control the Maruca pest spray pesticides as often as 6-10 times per growing cycle, adding that “This continuous spraying increases the cost of production to farmers as well as risks to human health.”

For him, aside the cost that come with the regular pesticide spraying of the cowpea crops, the effectiveness of chemicals used cannot be guaranteed as they may not be able to reach the niche on the plants where the larvae develop to cause damage to the crop.

“Generally, over-reliance on chemicals could lead to other unintended human health and also impact negatively on the environment through air pollution. Unused chemicals in containers may seep into nearby water bodies causing pollution and toxicities to plants, animals and human,” Dr Nboyine explained.

On his part, the National Cordinator of OFAB Ghana, Dr Richard Ampadu, said planting GM Cowpea “is a matter of choice; you can decide to go for it or not.”

For him, scientists are only interested in letting farmers and the public know what is good in the new seed or the new technology.

He said OFAB is only interested in creating awareness about the technology to a wider audience on biotechnology, which is relatively new to many people.

Dr Ampadu said the goal of both plant biotechnology and conventional plant breeding is to produce crops and animals with improved or desired characteristics.

He said yield loss due to these pests ranges between 70 and 80 per cent depending on the severity of attacks, hence a need to identify sustainable ways of managing these pests.

He pointed out that using conventional breeding practices, scientists have not been able to develop improved varieties of cowpea that can resist the legume pod borer.