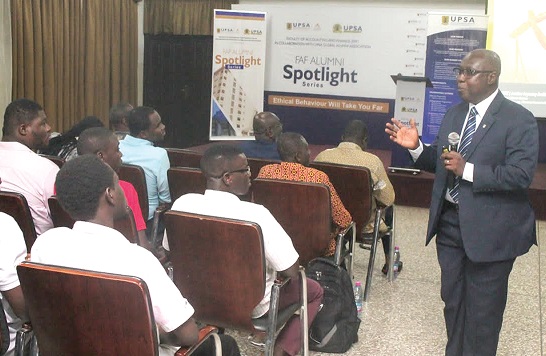 A Chartered Accountant and a business mogul, Kwadwo Mpeani Brantuo, has urged Ghanaians to uphold ethical standards in the society to help put the country on the path of growth.

“Every Ghanaian is complaining about the system not working and that is because people do things wrongly and they feel nothing bad about it.

“We all know the right thing to do but we feel reluctant to do it. We have to uphold ethics because the more people become aware of ethical behaviour, the more we can develop this country,” he said.

Mr Brantuo was speaking on the topic: “Ethical behaviour will take you far” at the Alumni Spotlight Series which was organised by the Faculty of Accounting and Finance of the University of Professional Studies, Accra (UPSA).

He explained that ethics was a moral principle that governed a person's behaviour.

Because it was a personal issue, he said people reacted to it differently and that was why things were not working the way it should.

“People are dumping rubbish everywhere while some are also driving carelessly on our roads. So many wrong things are happening but nobody seems to care and until we become ethically aware, the country will continue to remain where it is,” he stressed.

In the past, Mr Brantuo said the educational system prioritised ethics and due to that, books that talked about courtesy and ethics were made available to every student.

Aside from that, he said, there were subjects such as Religious and Moral Studies which also imparted morals and ethics to students.

In recent times, however, he said they were no more in the school curriculum and that had drawn the country backwards.

“We think that because of modernisation, these things are ancient and no more helpful but if we want to make progress, then we have to go back and pick these values and inculcate them in young people,” he said.

“Ghana will be good but we need to be ethically aware and we have to start from our youth, we have to encourage them to understand that ethics matter and it is very important.

“We should also not let our politics blindfold us, we have to live ethically because the power of ethics lives in all of us,” Mr Brantuo said.